On Nov. 3, 11 states will hold gubernatorial elections. Of those 11 states, nine incumbents will be running to keep their position as the chief executive of the state. Montana Gov. Steve Bullock is ineligible to run for reelection due to term limits, while Utah Gov. Gary Herbert has decided to forego reelection. A handful of utility commissioners will potentially be affected by the gubernatorial races. Within the first year of the governors' new term, roughly 15 commissioners will either be reappointed or replaced.

Forty-four states will hold legislative elections during 2020, with 86 of the 99 legislative chambers being on the ballot. While it is not conducting state senate elections this year, Michigan citizens will vote on the members of its House of Representatives.

Energy-related ballot measures will be voted on in Nevada and New Mexico. Nevada's measure will try to secure enough votes this second round to amend the state's constitution and require a renewable portfolio standard of 50% renewable resources by 2030. New Mexico's constitutional amendment would modify the current composition of the New Mexico Public Regulation Commission.

Due to the current pandemic, the election landscape has been dramatically altered. Nine states and Washington D.C. are providing for universal mail voting or voting at home. In 36 states, voters can list the coronavirus as a reason to apply for an absentee ballot, while the remaining five states still require a reason other than the coronavirus to secure an absentee ballot. With ballot policies varying by state, winners of certain elections may not be officially declared until a week after the election. 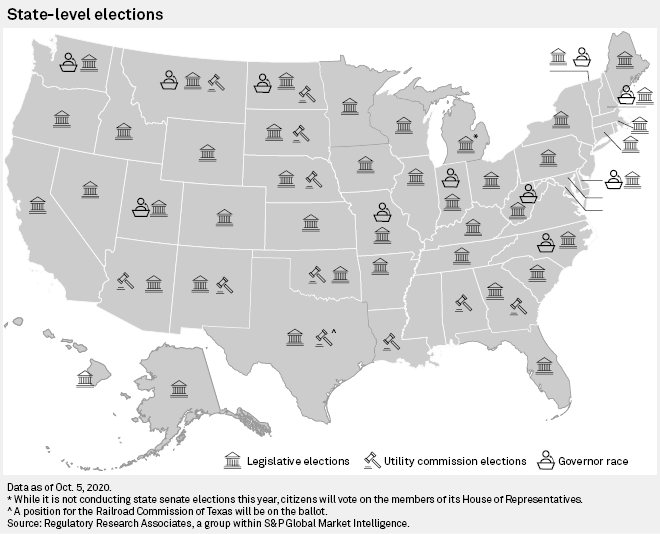 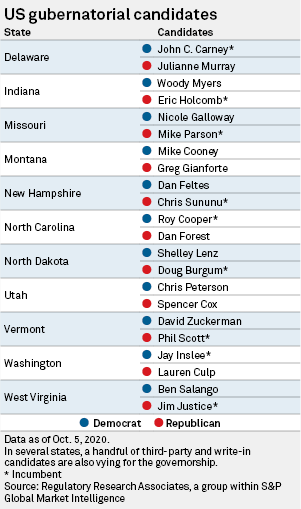 During the Nov. 3 general election, ballots will be cast across 11 U.S. states for governor, with nine incumbent governors running for reelection. In Montana, Democrat Gov. Steve Bullock is term-limited and is ineligible to run for reelection. Meanwhile, in Utah, Republican Gov. Gary Herbert has declined to seek reelection for a third term.

New governors can bring about changes in the energy landscape in their state, as different governors have different priorities. These gubernatorial priorities and objectives play an instrumental role in driving legislative policy agendas.

In recent years, the energy segment of gubernatorial candidate platforms has centered on ensuring a clean energy future, including decarbonization of the power sector and increased utilization of renewable resources. Another front-line issue has been grid modernization, including the deployment of distributed energy resources and protecting the nation's energy system and infrastructure from cyber threats.

Election of new governors generally brings changes in the makeup of state public utility commissions. While the commissions are independent regulatory bodies, gubernatorial actions can influence the commission's investigations, priorities and direction.

Although, if a vacancy was to occur on the Montana Public Service Commission, the governor is required to fill the appointment. The appointee than shall hold office until the next general election and until a successor is elected. If the former commissioner represented a political party eligible for primary election under state statute, the governor must appoint someone of the same political party affiliation.

Members of the North Dakota Public Service Commission are elected in statewide elections for six-year terms; however, if a vacancy occurs before a given term expires, the governor may appoint a replacement who serves until the next general election, at which time that individual may seek election to complete the remainder of the term.

In five states — Delaware, Missouri, Utah, Washington and West Virginia — the commission chairman is designated by the president or governor and serves at the governor's discretion for an unspecified term. It is noted that in four states in which gubernatorial elections will take place — Indiana, New Hampshire, North Carolina and Vermont — the commission chairman is also appointed by the governor; however, the chairman serves for the duration of the individual's term.

In terms of partisan composition, in five states — Delaware, Indiana, Utah, Washington and West Virginia — minority party representation is required. No more than two regulators may be from the same political party in a three-member commission and no more than three in a five-member commission. In Missouri and North Carolina, minority party representation is not required but has been practiced in the past. 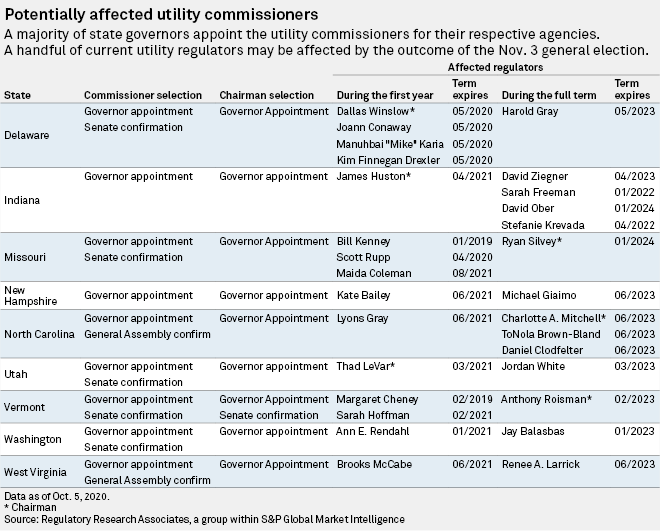 There has not been any specific correlation between the quality of energy legislation enacted and which political party controls the legislature. Of course, in a situation where the governor and legislature are of the same political party, generally speaking, it is easier for the governor to implement key policy initiatives, which may or may not be focused on energy issues. 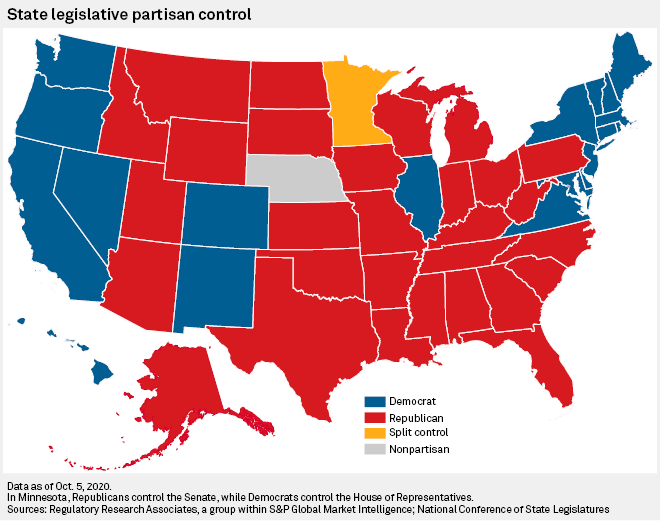 Forty-four states will hold legislative elections during 2020, with 86 of the 99 legislative chambers being on the ballot. While it is not conducting state senate elections this year, Michigan citizens will vote on the members of its House of Representatives.

In this general election, energy-related voter questions will be on the ballot in Nevada and New Mexico. In Nevada, Ballot Question 6 will be voted on for the second time, after securing enough votes in 2018 to be placed on the ballot this year.

However, after having secured the first round of votes necessary to be placed on the ballot, Senate Bill 358, which amended the state's RPS requirement beginning in 2020, was signed by first-term Nevada Gov. Steve Sisolak. Specifically, it applies to the state's large investor-owned utilities and requires that 50% of the total amount of electricity sold to retail customers be sourced from renewable resources by 2030. The measure also has a provision that sets a 100% carbon-free goal by 2050.

New Mexico voters are to consider a ballot measure, Constitutional Amendment 1, that would change the New Mexico Public Regulation Commission, or PRC, from a five-member body comprising elected officials to a three-member body consisting of commissioners appointed by the governor.

Beginning in 2023, gubernatorial appointees would be selected from a pool of candidates chosen by a nominating committee. State senate confirmation of gubernatorial appointments would be required. The appointed commissioners would serve six-year staggered terms and would be ineligible to serve more than two consecutive terms. In addition, the commissioners would continue to be subject to professional qualifications and continuing education requirements that are in place for the current PRC commissioners.

Regarding terms of office, the ballot measure would amend the two commissioner seats that are up for election this year, altering them to be two-year terms, rather than the current four-year terms. In addition, the terms of the initially appointed three-member commission would be two, four and six years, such that the subsequent six-year terms could be properly staggered.

The coronavirus pandemic has hit almost all aspects of Americans' lives, and the general elections have been the latest facet to be affected. While the dramatically altered election landscape has caused many to worry about the legitimacy of mail-in ballots, states across the country have put policies in place, albeit some only temporarily, to allow for voters to safely cast their ballots from their homes.

With ballot policies varying by state, winners of certain elections may not be officially declared until a week after the election. In 28 states, ballots much be received by Election Day, while 22 states will accept postmarked ballots after Election Day. 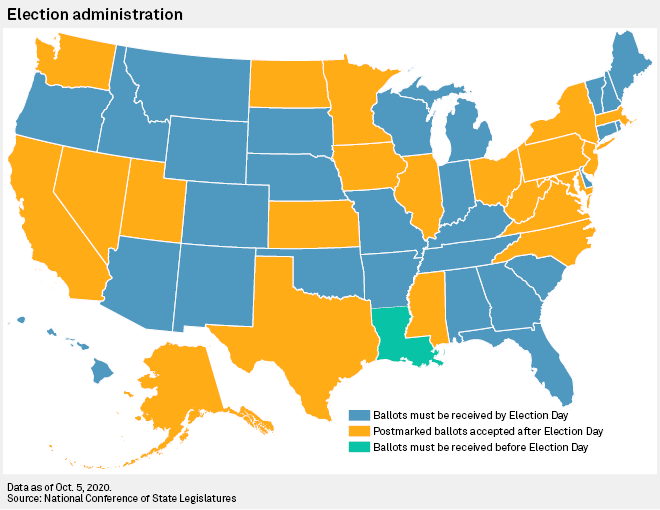