Nearly half (46%) of the subscription video on demand users we surveyed have downloaded a video from an SVOD streaming service for offline viewing, with about 22% doing so weekly. For homes with children the response rate jumps to 57% ever and 26% weekly. 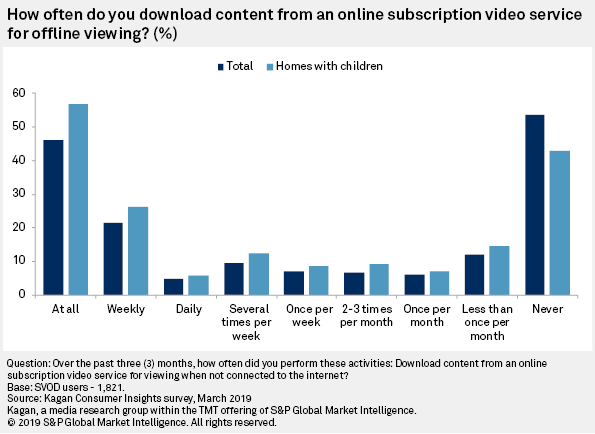 But, according to our U.S. Consumer Insights survey completed in March, having kids to entertain was actually only the third most common occasion to “download-to-go.” Of the 842 respondents who indicated they download content for later use, the top two reasons driving this activity were “travel” and “repeat viewing” at 55% and 35%, respectively, compared to the 32% who answered “kids.” Just 28% cited a poor internet connection as a driver.

We received several open-ended “other” responses that are included in the Excel attachment. Four of the 13 write-in replies were related to the limitations of their Wi-Fi-only devices or waiting at the doctor’s office. One survey taker answered they did so to “save a show,” and another downloads to get ahead of “power outages during storms.” 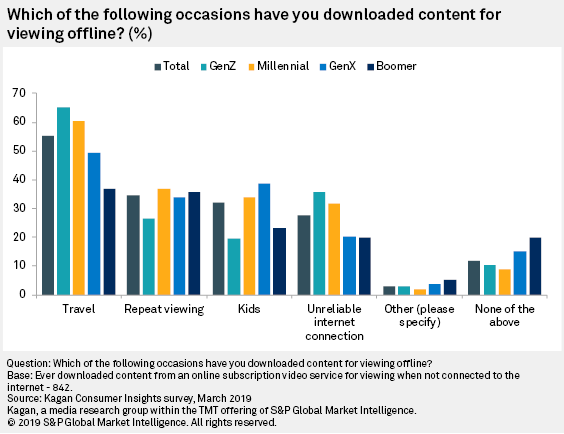 At 65%, travel was the most likely reason cited by GenZ survey takers and the rate drops as survey takers age all the way down to 37% for Boomers. Inversely, kids was the reason most cited by GenX at 39% compared to 34% of Millennials and just 19% of Gen Z. Older survey takers were less likely to cite a poor internet connection for later offline viewing (20% for both GenX and Boomers), but this was more of a challenge for those 21 and under at 36%.

We also asked those who had never used download-to-go how interested they would be in the activity. About 37% of these survey takers were not interested, 35% were lukewarm and 28% were extremely or very interested in the concept.

Most major OTT services have rolled out download-to-go capabilities although a few notable holdouts such as AT&T Inc.'s HBO and Hulu LLC still do not offer the feature as of August 1, 2019. Amazon.com Inc. was the first major service to offer downloads for offline viewing in 2015, followed by Netflix Inc. in late 2016 with most other services following suit. Hulu had announced in May 2018 that it would soon launch downloadable, ad-supported content for the 2018-2019 upfront season but that time frame came and went and downloads are still not available on Hulu as of July.

Service providers likely see downloads as a differentiator in a crowded, competitive marketplace, but complicated terms and restrictions could be hampering consumer adoption to some extent. Several services cap maximum downloads to 25 or fewer titles, with downloaded content often expiring after 30 days or when licensing windows close. Not all titles are available for offline viewing and some downloaded titles must be completed within 48 hours once consumers start to watch them. 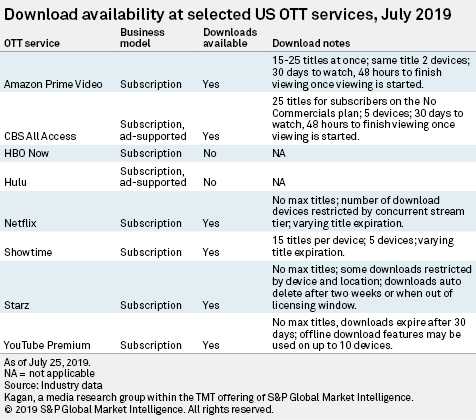 Data presented in this article was collected from Kagan Consumer Insights surveys. The online survey consists of 2,511 (first quarter 2019) adult internet users in the U.S. Data from the survey has a margin of error of +/- 1.9 ppts at the 95% confidence level. Gen Z adults are aged 18-21. Millennials are adults aged 22-38. Gen X adults are aged 39-53. Baby Boomers are adults aged 54-73 and Seniors are adults over 74 years of age.