This was the second year in a row that Brazil broadband ARPU registered double-digit growth in local currency, having remained relatively stable from 2008 to 2015. This can be explained by subscriber migration from low-speed DSL connections to high-speed fiber services. For the first time, the Brazilian market saw DSL households drop in 2017, while fiber-to-the-home (FTTH) connections jumped 90.8%. The majority of subscriber growth, both in fiber connections and total broadband households, is attributable to small, regional ISPs that contributed an estimated 1.3 million total broadband net adds, of which over 850,00 were FTTH connections. 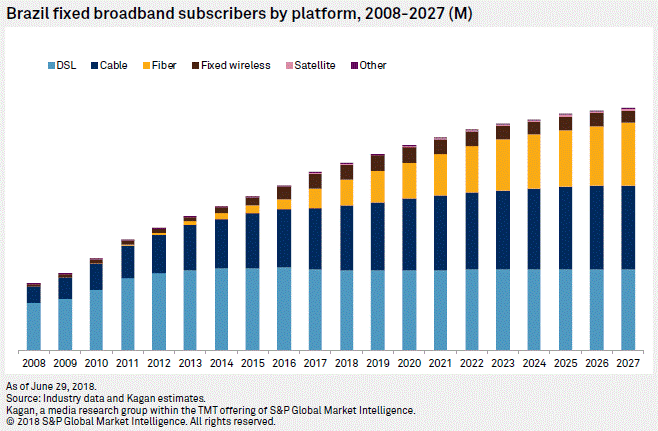 Migration to higher speeds is occurring across technologies, with cable and DSL operators also reporting growth in average speeds. According to Anatel, connections above 12 Mbps grew from 35.2% of total fixed broadband subscribers in 2016 to 42.0% in 2017. Vivo reported a 24% increase to 22 Mbps in average broadband speeds amongst its total residential client base. Oi, the fixed telephony incumbent for the rest of the country, currently under restructuring, reported a 21.7% growth in average speeds to 8.3 Mbps, with 24.2% of users subscribing to 15+ Mbps speeds. Brazil's largest ISP, América Móvil's cable operation Claro Brasil, branded NET, ended 2017 having reached the 2 million mark for broadband subscribers over 34 Mbps, representing 23.6% of its total subscriber base.

All three major ISPs registered ARPU growth during 2017, with telcos Vivo and Oi both growing revenues despite losses in DSL households, which comprise the majority of their broadband subscribers. Kagan expects this trend to continue, driving a slow but steady increase in ARPUs as telcos drop low-value legacy ADSL users and migrate subscribers to higher speeds on VDSL, FTTC and FTTH platforms at higher prices. Fiber is expected to represent 25.8% of total fixed broadband households in Brazil by 2027.

However, broadband penetration in Latin America's largest market remains low at 37.5% of total households, ranking 11th in the region and 54th globally.

This is mainly due to lack of affordability. According to an annual survey conducted by Brazil's Center of Studies on Information and Communication Technologies (Cetic.br) in 2016, 57% of Brazilian households with no access to the internet cite cost as a reason for their lack of connectivity, despite the increasing affordability of fixed broadband services in the country over the past 10 years. 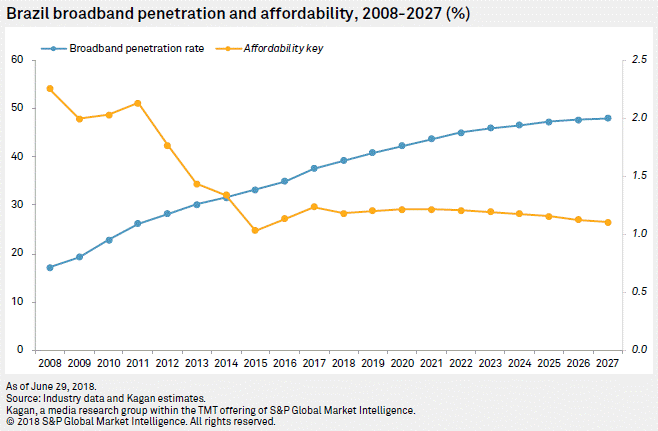 With broadband ARPU increasing at a faster rate than incomes over the past two years, however, fixed broadband affordability has suffered a setback. Income growth in Brazil took a severe blow in the last three years due to economic recession, with unemployment jumping from 6.5% in 2014 to 11.8% in 2017, while annual minimum wage hikes in 2017 and 2018 were the lowest since the 1990s, and are expected to remain reduced due to government austerity measures. With prices expected to continue increasing in Brazil over the next decade, affordability isn't expected to improve in the short term, therefore slowing fixed broadband penetration growth.

Kagan estimates that fixed broadband penetration will remain below 50.0% in Brazil by 2027, as lower-income households come to depend on cheaper mobile broadband services for connectivity. According to the 2016 Household Survey conducted by Brazil's official statistics agency, the Brazilian Institute of Geography and Statistics, mobile broadband has already overtaken fixed broadband usage in the country, with 26.7% of households with access to the internet depending solely on mobile connectivity compared to 21.2% for fixed services. Mobile ARPUs in Brazil, which increasingly contemplate broadband rather than voice services, are expected to drop, with affordability reaching 0.3% by 2027 compared to fixed broadband's 1.1%, according to Kagan estimates.

Coverage is also an issue. Fiber backhaul remains unavailable in 2,345 municipalities, representing 14% of Brazil's population, according to Anatel. Another 2,221 do have access to fiber backhaul, but consumer average speeds remain below 5 Mbps, as they lack robust last mile networks due to low return-on-investment opportunities for ISPs, a problem also identified in major cities' poorer neighborhoods.

Vivo, for instance, ended 2017 with FTTH network coverage in 87 cities, all of them with populations above 100,000 and with coverage mainly focusing in high-value neighborhoods. Comparatively, 4G wireless networks already reach 4,032 municipalities as of May 2018, representing 94.1% of Brazil's population. 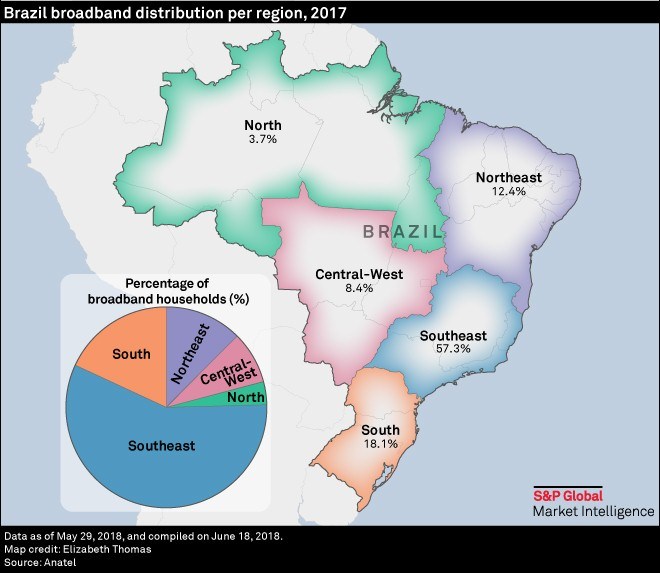 The more rural North and Central-West regions face significant barriers in broadband infrastructure deployment. However, the richer Central-West concentrates 8.4% of broadband subscriptions compared to its 7.7% total households, while the North, which includes the Amazon rainforest, totals a mere 3.7% of broadband connections with 7.3% of households.

Global Multichannel is a service of Kagan, a group within S&P Global Market Intelligence's TMT offering. Clients may access the full article, with detailed ARPU and revenue and market share data, as well as historical and projections data available in Excel format, by clicking here.