Tower construction in mainland China has been gravely affected by the COVID-19 lockdowns in 2021 and 2022, causing construction to stall and impacting capital expenditures.

Tower construction in mainland China has been gravely affected by the COVID-19 lockdowns in 2021 and 2022, causing construction to stall and impacting capital expenditures.

After a slowdown in 2020, towers and small cells in Asia-Pacific experienced faster growth in 2021. Despite the recovery, rising inflation and contractionary monetary policies in the region could drag deployments in the next few years.

Asia-Pacific's tower industry is in a tight spot. While the arrival of 5G has raised demand for new network infrastructure, supply chain disruptions, rising energy costs and interest rate hikes have driven up tower construction and operating costs for mobile operators and tower companies alike.

We estimate that towers and small cells in Asia-Pacific grew by 5.1% in 2021 to 5.79 million from 5.51 million in the previous year. The introduction of vaccines in late 2020 and the subsequent gradual relaxation of pandemic-related containment measures allowed greater movement of people and goods, greatly benefiting the capital-intensive tower industry.

61.5% (3.6 million) of these towers are still traditional macro-cell towers, but this proportion has decreased since last year as operators in the region expanded their small cell and distributed antenna system, or DAS, portfolio to a total of 2.2 million, or 37.8% of total towers in 2021.

The rest of East Asia became the region with the highest number of towers and small cells in 2021, comprising 39.9% of total towers in the region. Greater China, composed of mainland China, Taiwan, Hong Kong and Macao, comes close at 39.4%. Looking at market-level counts, mainland China is still the top market with 2.1 million towers, followed by South Korea with 1.5 million, Japan with 0.8 million, India with 0.7 million and Indonesia with 0.1 million. 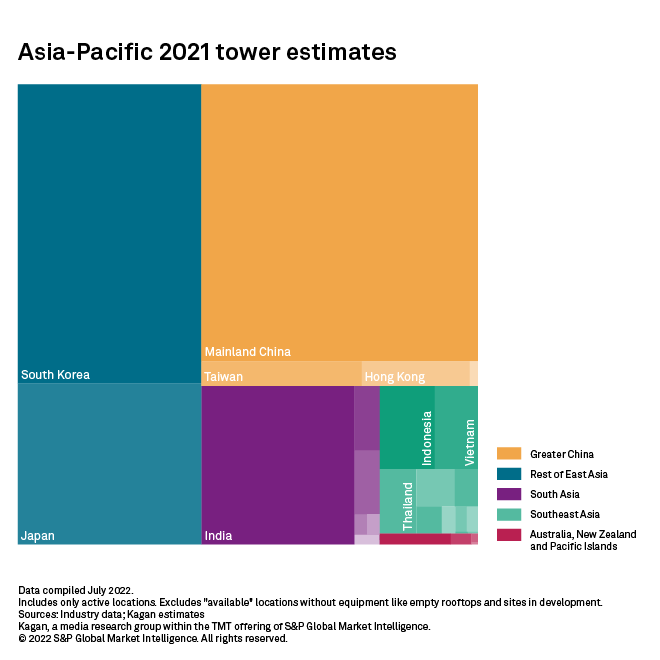 The industry has also faced several headwinds. COVID-19 cases in the region surged in late 2021 and early 2022 as new virus variants spread. The response of governments in the region has been mixed, with some doubling down on their zero-COVID policy. Mainland China presented a particular problem for the tower industry since it supplies a big portion of the raw materials used in the construction of new towers and other network infrastructure. Further compounding these issues was the global chip shortage, driven by disruptions in Taiwan's semiconductor industry due to new COVID-19 variant outbreaks.

After two years of accommodative monetary policy by central banks to stimulate the economy of the region, inflation rose rapidly in many markets in 2022. In response, some central banks raised benchmark interest rates. For the tower industry, this is bearish, since higher interest rates mean higher cost of financing, and ultimately, some projects being shelved or downsized. While current capital deployments are planned years in advance, the current unfavorable market environment may force tower companies to be prudent with future capital expenditures.

These challenges come at an inopportune time when many operators in Asia-Pacific are deploying 5G mobile services. As noted in our last update, small cell deployment and infrastructure sharing agreements have, for some operators, helped to cut expenses while expanding their network footprint. Sustainability, including in supply chain, and energy-saving measures have emerged as critical areas of focus given the global context of energy price hikes.

The unfavorable market conditions also accelerated the pace of consolidation of Asia-Pacific's tower industry. In addition, mobile operators have continued to divest mainly passive tower assets to tower companies to pay off debt and invest in network and operational improvements.

This expected slowdown is reflected in our projected 3.8% compound annual growth rate of total towers and small cells in the region from 2022 to 2032, which is slightly lower than our projections last year. Traditional towers, which are more expensive to build, will be more gravely affected, resulting in 2.4% CAGR in the same period. The shift of operators and tower companies to small cells and DAS will fuel a relatively faster CAGR of 5.6% in the same period. 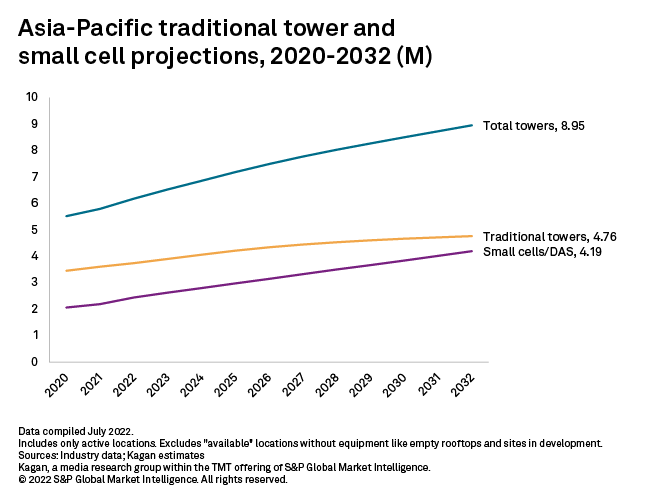 Tower construction in mainland China has been gravely affected by the COVID-19 lockdowns in 2021 and 2022, causing construction to stall and impacting capital expenditures. Mainland China's largest tower company, China Tower Corp. Ltd., cut the proportion of its capital expenditure dedicated to new site construction in favor of site replacement and improvement, on top of resource-sharing agreements with other market players to meet the demand for network capacity. Following on an earlier development of rising tower operation costs, China Tower has developed power supply and battery innovations on its towers.

Tower growth in Greater China remains roughly the same as our previous forecast at 4.3% CAGR from 2022 to 2032. This is fueled largely by the 18.9% CAGR in small cells and DAS, which are preferred by major mobile operators and tower companies in the region for their better coverage in indoor spaces and dense urban areas.

Japan had an aggressive tower growth of 19.7% in 2021 after local operators constructed new 5G towers throughout the country. South Korea likewise had 2.3% tower growth in the same year. Still, tower operation expense continues to be a problem for mobile operators and tower companies in both markets, especially concerning towers and small cells using millimeter wave spectrum.

Indonesia and the Philippines, which have long lagged behind their neighbors due to financing and geographical difficulties, are set to see their tower portfolios increase significantly as tower operators pour capital investments into the construction of new sites.

The entry of a third operator DITO Telecommunity Corp. and the government's push for infrastructure building also contribute to the tower boom in the Philippines. In Indonesia, the previously fragmented tower industry has undergone consolidation through the acquisition of PT Solusi Tunas Pratama Tbk, or STP, by the country's largest tower company, PT Profesional Telekomunikasi Indonesia, or Protelindo, for $1.67 billion on October 2021.

Mobile operators in both Indonesia and the Philippines have also announced the divestiture of some of their towers to tower companies so that they can focus on their core competencies, especially in preparation for 5G expansion. This trend increases the tower portfolio, and consequently the economies of scale, of tower companies in both countries.

Some announced mobile operator and tower company deals include:

* PLDT Inc.'s announced sale of its mobile towers and related infrastructure to tower company Comworks Infratech Corp. for an unannounced price; and

With these developments, Southeast Asia is set to see the fastest tower growth in Asia-Pacific at a 6.1% CAGR from 2022 to 2032. Tower growth in South Asia would be equally vibrant at a 5.2% CAGR in the same period.

The construction of new towers in Australia, New Zealand and the Pacific Islands has always been expensive due to their geography, causing this group to have the smallest tower portfolio in Asia-Pacific. We project a 4.6% CAGR for towers in this region from 2022 to 2032, fueled mostly by small cell deployments for 5G in urban areas, as well as infrastructure sharing projects for rural area coverage such as Australia's National Broadband Network and New Zealand's Rural Broadband Initiative. 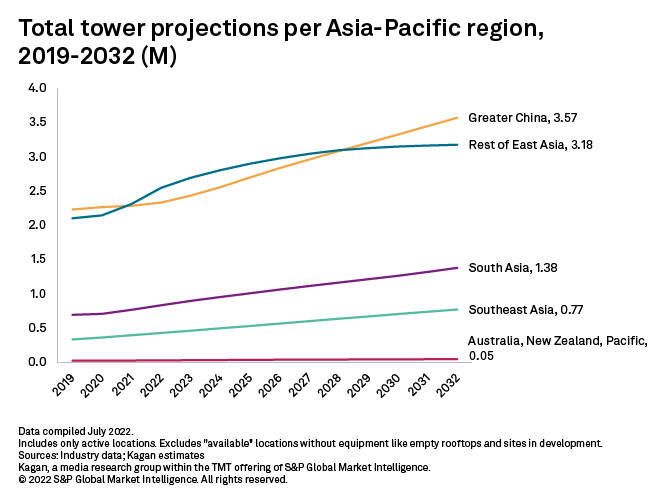