Apple’s entry into the streaming video wars debuted in November, with Apple TV+ launching in more than 100 countries worldwide. A low price point of $4.99/month, wide global availability at launch and a promotional offer of a free year of Apple TV+ for select new purchases of Apple devices could help the service find traction in a crowded market. However, limited content availability might be a difficult obstacle to overcome.

Apple TV+'s price point of $4.99/month comes in well below most other major subscription video-on-demand services, even undercutting the $5.99/month ad-supported subscription tiers offered by both CBS Corp.'s CBS All Access and Hulu. Apple may be willing to position the Apple TV+ service as a loss leader of sorts for quite some time, with a goal of recouping any operating losses from the SVOD service through hardware and services revenues. Unlike other operators in the SVOD space, Apple's cash on hand of over $210 billion as of the third quarter could give it a very long runway as it rolls out and develops the Apple TV+ service. 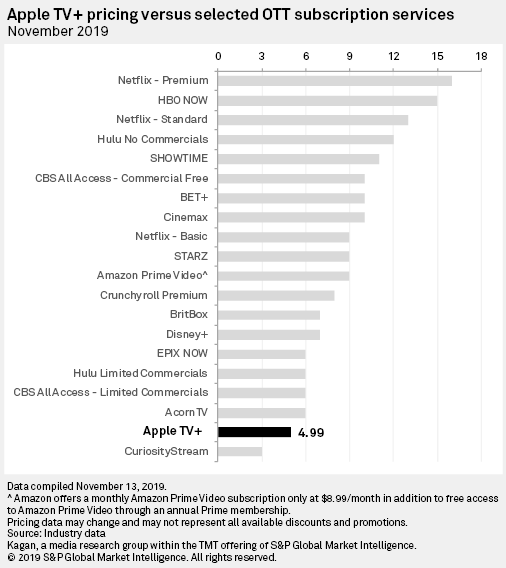 Apple TV+'s availability in over 100 countries at launch was notable, with the majority of SVOD services launching initially in the U.S. only or in a handful of markets. Only Amazon.com Inc.'s Amazon Prime Video and Netflix Inc.'s Netflix are available in more countries worldwide than Apple TV+, with The Walt Disney Co.'s Disney+ taking a much more measured approach by launching in the U.S., Australia, Canada, the Netherlands and New Zealand in its first month of operation. Apple's decision to rely almost entirely on original programming versus licensed content could have made its widespread international launch more feasible, although the lack of localized content may tamp down demand in many countries. 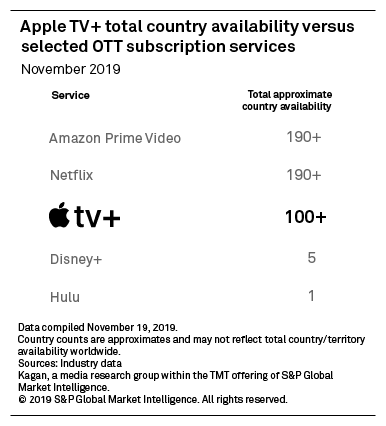 Apple TV+'s content catalog at launch was also unusual, offering less than 10 series and one documentary film. With the exception of its comedy "Dickinson" which made all 10 episodes of its first season available at launch, most of Apple's original series are releasing a new episode every Friday — a release schedule that meant less than 50 combined series episodes were available when Apple TV+ debuted.

Apple plans to invest billions in original programming with several series such as "The Morning Show" and "See" landing headline stars including Jennifer Aniston, Reese Witherspoon, Steve Carell and Jason Momoa, but content for the service could be limited for quite some time. Apple TV+ bowed with approximately 32 hours of total content in its library — a far cry from other services that offer well over 10,000 hours of content spread across thousands of series and films. Apple's family-friendly stance on its original programming was also evident, with about half of its content at launch coming from kids and family content.

Device availability for Apple TV+ is also limited relative to some services, with support for iOS, streaming media devices/sticks — Amazon Fire, Roku, and Apple TV — and smart TVs, such as Roku and Samsung, in addition to access via web browsers. Some services launch with limited device support and expand over time, although Apple's vested interest in promoting its hardware lineup might mean that an Android app and support for devices from other rivals may never materialize. 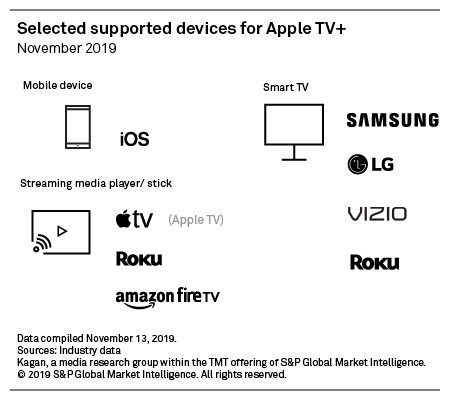 State of US online video: Subscription video on demand