American International Group Inc.’s Brian Duperreault remained the highest-paid CEO among U.S.-listed property and casualty or multiline insurers in 2019, although his compensation dropped slightly from 2018, according to an S&P Global Market Intelligence analysis.

Duperreault's total adjusted compensation slid 8.0% to $19.2 million, which consists of $1.9 million cash, $8.6 million of stock, $2.8 million of options and $5.9 million from a nonequity incentive plan. Duperreault's pay is approximately 288x the median employee salary at AIG.

In second place is Allstate Corp.'s Thomas Wilson, who received $16.3 million last year, a decline of 8.7% from his pay in 2018. His compensation, which is about 317x the median employee salary at Allstate, consists of $1.5 million cash, $6.0 million of shares, $4.0 million of options and $4.7 million from a nonequity incentive plan.

Assurant Inc.'s Alan Colberg saw the biggest percentage drop in compensation at 30.5% to $9.5 million. ProSight Global Inc.'s Lawrence Hannon was the biggest gainer percentage-wise, with his compensation jumping 390.6% to $7.2 million after being granted $5.4 million of stock. 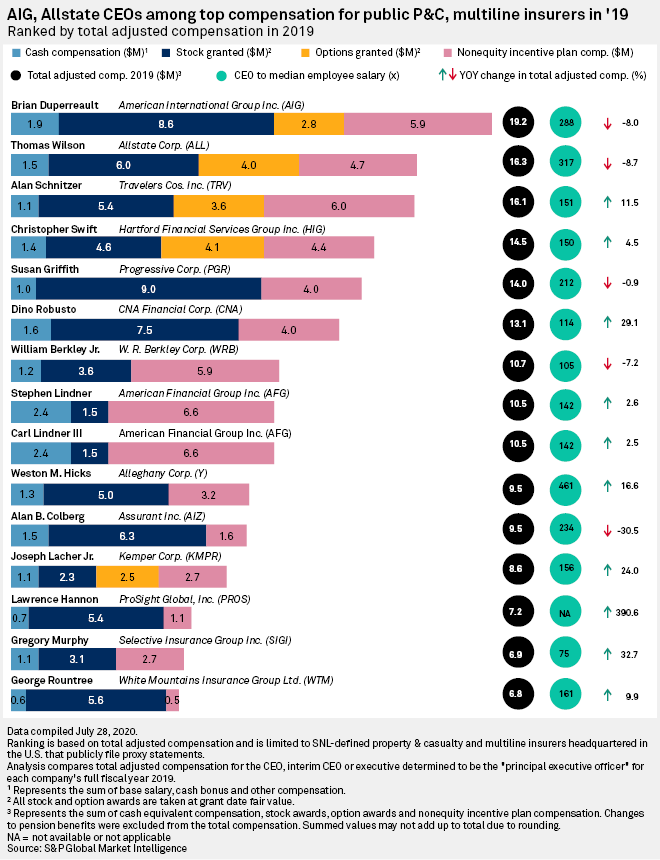