A Long And Winding Road To M&A Recovery


A Long And Winding Road To M&A Recovery

The M&A market has taken steps toward a recovery, but many more are needed before a pickup in activity fully hits its stride.

During recent earnings calls, several investment bank executives noted how their clients' CEOs are starting to consider deals. But it is still unclear when that will lead to a meaningful uptick in announced M&A activity, which on a deal value basis was down 90.3% year over year in the U.S. during the second quarter, according to S&P Global Market Intelligence's latest M&A and equity offering report. 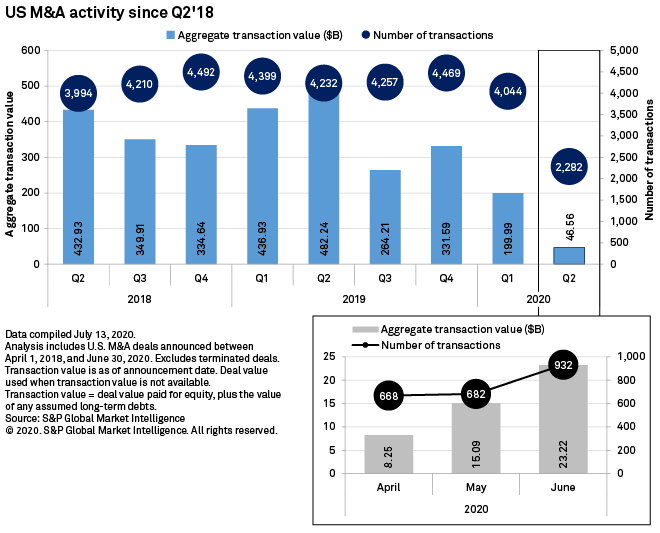 Evercore Inc. Co-Chairman and Co-CEO John Weinberg is hopeful the M&A business is better next year. "The merger engine is going to be what powers our 2021," he said during a July earnings conference call. "We just don't know exactly when that kicks in."

Weinberg is not the only one looking to next year. During the Goldman Sachs Group Inc. earnings call, Chairman and CEO David Solomon said deal talks between CEOs are more robust than they were in early May, and he expects that to translate to an increase in transaction activity over the next two to four quarters.

Many executives have yet to pull the trigger on deals because the fallout from the pandemic is still giving them pause about the economic outlook. Morgan Stanley CFO Jonathan Pruzan said M&A will likely remain muted until there is more clarity on the path of the recovery and stability in valuations.

Given the uncertainty, executives may want to target smaller-ticket M&A transactions that could help them add on to their businesses as opposed to larger, more transformational deals. While this may help increase the total number of M&A deals, fewer big deals would weigh on total deal value.

Still, some pockets of strength might open up. Lazard Ltd. Chairman and CEO Kenneth Jacobs noted that sectors such as technology and biopharma — those least affected by the pandemic — will likely become the most active in deal-making. Less activity is expected from the most affected sectors, such as travel, leisure and retail, Jacobs said during a July conference call.

Private equity firms could help increase activity. Jacobs noted that financial sponsors on U.S. sell-side deals have restarted discussions that were postponed because of the pandemic, and for buyers, financing has improved, especially for private equity transactions. "It's not anywhere back to where it was, but there is financing that's becoming more available," he said.

The second quarter did see some substantial exits via stock sales as investors took advantage of favorable market prices, with the S&P 500 jumping 20%, the biggest increase in a quarter since 1998. According to the Market Intelligence report, selling shareholders received the proceeds from each of the second quarter's four largest U.S. equity issuance deals, which came from T-Mobile US Inc., BlackRock Inc., Regeneron Pharmaceuticals Inc. and PG&E Corp.

In the U.S., healthcare raised more capital than any other sector as its issuance total skyrocketed $34.68 billion, up 206.6% sequentially. Piper Sandler Cos. Chairman and CEO Chad Abraham said the activity in July stayed strong. He noted that healthcare valuations are high, and companies are seeking more capital than ever to speed up the development of medical solutions to the pandemic.

In the second quarter, many of the largest issuers in the healthcare space included acquisitions in their planned use of proceeds. Some large healthcare M&A deals have come to market in the third quarter. Teladoc Health Inc. announced an $18.26 billion deal for Livongo Health Inc. and Siemens Healthineers AG agreed to acquire Varian Medical Systems Inc. in a $16.35 billion deal.

It is possible the M&A downturn is short-lived, Evercore Co-Chairman and Co-CEO Ralph Schlosstein said during his company's earnings conference call. But he added there is no way to know how long the cycle will last.

"We know we're three months closer to the recovery than we were three months ago," Schlosstein said. "But we don't have a huge amount more clarity as to when that recovery will begin." 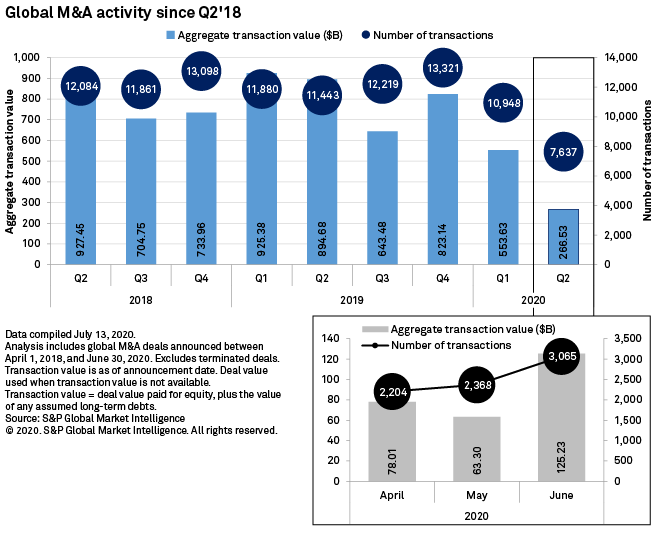