Large increases in reserves, particularly in the second quarter of 2020, and an abundance of excess liquidity depressed bank returns in the first half of the year. Bank earnings recovered in the fourth quarter of 2020 as credit costs plunged, with government efforts to soften the economic blow of the coronavirus keeping many borrowers afloat. Against an improved economic outlook, bank earnings are poised to jump more than 40% in 2021 as margin expansion and further reserve releases are in the offing, according to S&P Global Market Intelligence's annual outlook for the industry.

Click here to read the full 2021 US Bank Market Report

After building reserves dramatically in 2020, banks should release reserves this year as the economic outlook has improved. During the summer of 2020, the unemployment rate was expected to remain above 8% through 2021, but now the consensus among more than 60 economists is for unemployment to fall to 5.80% in 2021.

The dire outlook during the height of the pandemic led to sharp increases in reserves for loan losses in 2020. Most publicly traded banks — which collectively hold the majority of the industry's assets — adopted a new reserve methodology, dubbed the current expected credit loss model at the beginning of 2020. That provision requires banks to reserve for estimated losses over the life of a loan based on an economic forecast.

Banks adopting CECL drove the industry's reserves to loans to 2.23% by the third quarter but as the economic environment improved, a number of banks reduced reserves in the fourth quarter, leaving the metric at 2.17% by year-end. The massive reserve builds through 2020 should prove more than ample to cover realized credit losses in 2021, allowing institutions to substantially reduce provisions for loan losses. We expect provisions to fall short of charge-offs in 2021 and 2022, allowing banks to release $13.26 billion and $13.88 billion in reserves in those years, respectively.

Some banks that built reserves substantially have already received a strong boost. JPMorgan Chase & Co., for instance, increased its reserves to more than 3% of loans based on the assumption that the unemployment rate would remain above 10% through 2020 and only dip to 7.7% by the fourth quarter of 2021. As the economic outlook improved, JPMorgan released reserves in the second half of 2020. Those reserve releases equated to more than 17% of the institution's earnings in the final two quarters of 2020. 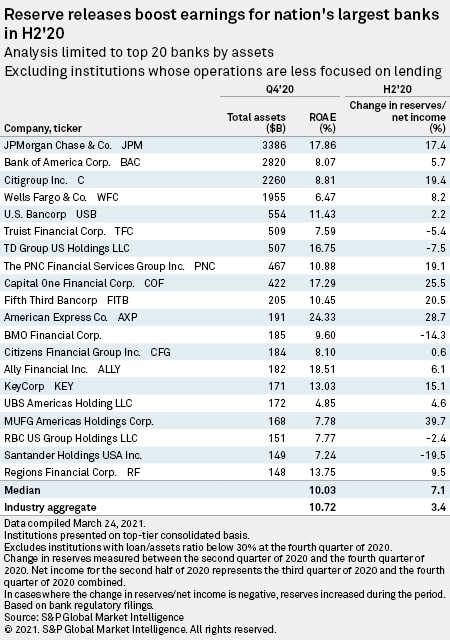 While additional reserve releases would bolster bank earnings, net interest margins likely will remain depressed as excess liquidity continues to build on bank balance sheets. Loan demand outside of the Paycheck Protection Program, or PPP, has remained weak, while deposits surged in 2020 and have continued to grow early in 2021.

Deposits grew at a historic pace in 2020 due to the Federal Reserve's efforts to flood the markets with liquidity through quantitative easing, which in turn has increased the level of reserves in the banking system.

Deposit growth also likely benefited from PPP borrowers and corporates that drew on existing lines of credit early in the pandemic parking the funds they received. Government stimulus has supported deposits as well, sending U.S. savings rates above 12% every month since April 2020. Before the pandemic began, the monthly savings rate exceeded 10% just once since January 2000.

Federal Reserve data shows that deposits have continued to grow through the first few months of 2021, while loan balances have been flat. S&P Global Market Intelligence expects loans to grow modestly in 2021, climbing 2% from year-ago levels as economic activity resumes in the second half of 2021, with greater distribution of COVID-19 vaccines.

Deposit growth should outpace loan growth but could wane from the elevated pace seen in the first few months of 2021 as consumers put excess savings to work. Consumers have recorded near-record savings rates over the last year, accumulating nearly $2 trillion in excess savings from March through December 2020. We arrived at that figure by assuming every dollar over the monthly average savings between January 2017 and February 2020 was excess.

The savings rate spiked again in January 2021 due to the passage of $900 billion in stimulus in December 2020. An even larger, $1.9 trillion stimulus package was signed into law in early March and likely will support further deposit growth in the near term. But the distribution of vaccines should allow economies to reopen, which in turn is expected to lead to increased consumer spending. 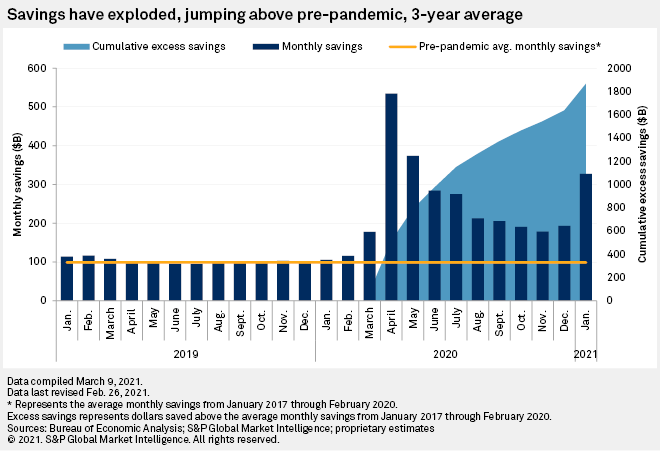 Growth would be welcome given the lack of attractive yield opportunities to deploy excess funds outside of loans. Loan yields have come under significant pressure as well due to rate cuts by the Fed, the plunge in long-term rates and little loan demand outside of PPP borrowers.

Loan balances actually declined in 2020 when excluding loans made through the PPP. The fact that PPP drove loan growth is particularly noteworthy because the government guaranteed credits carry rates of just 1%. The program offered small businesses low-rate, forgivable financing provided that borrowers use a majority of the funds for payroll. While the loans carry low rates, the credits are expected to bring fees of about 3% on average once loans are forgiven, but that process took longer than many bank watchers expected.

As the PPP forgiveness process began and long-term interest rates rose in the fourth quarter of 2020, loan yields stabilized.

S&P Global Market Intelligence expects the industry's loan yield to hold steady at 4.57% in 2021 and then dip to 4.53% in 2022. Bank margins should still expand over the next few years, albeit modestly, as funding costs decline further and banks gradually shift liquidity from cash held at other banks to higher-yielding assets.

While margins are projected to remain near historical lows, the expansion coupled with lower credit costs will propel bank earnings notably higher over the next few years. That growth should allow returns on equity to return to double-digit levels by 2022.

S&P Global Market Intelligence analyzed nearly 10,000 banking subsidiaries, covering the core U.S. banking industry from 2004 through 2020. The analysis includes all commercial and savings banks and savings and loan associations, including historical institutions, as long as they were still considered current at the end of a given year. It excludes several hundred institutions that hold bank charters but do not principally engage in banking activities, among them industrial banks, nondepository trusts and cooperative banks. 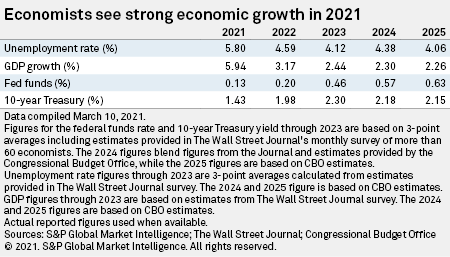 To read the full 2021 US Bank Market Report