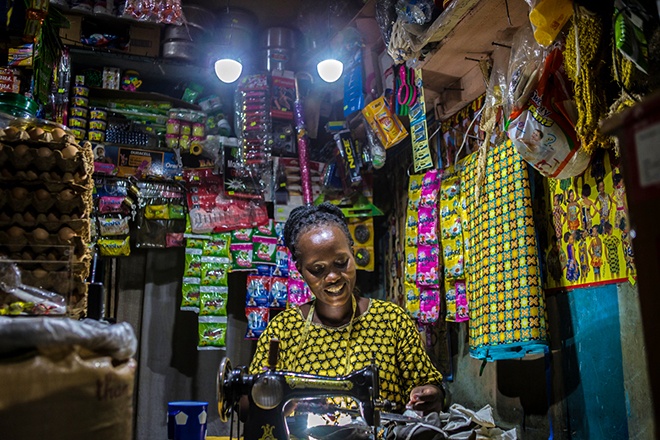 Susan, a customer of solar energy company M-KOPA. She uses solar power to light up her home and small business in Uganda.
Source: Allan Gichigi / M-KOPA

Rising electricity demand, resulting from economic development and population growth, has pushed large parts of Africa into the spotlight for providers of small-scale, off-grid solar power — including some of Europe's largest utilities. Globally, investment into the sector is set to reach an all-time high this year.

With millions of people across the continent still lacking access to reliable electricity, the potential for developing so-called pay-as-you-go solar energy systems or mini-grids is vast, industry experts said at the Off-Grid Energy Access Forum in London on Oct. 2, organized by Greentech Media. The sector is even attracting a number of European utilities and energy companies, who are seeing stagnating demand growth in their home markets.

French utility Electricité de France SA, for example, has been active in African countries including Togo and Cote d'Ivoire for several years, developing projects ranging from small-scale solar to those for industrial and agricultural uses. More recently, the company has partnered on such projects with Bboxx, which designs, manufactures, distributes and finances "plug and play" solar systems.

But a variety of structural and economic factors challenge the profitability of these projects, especially in the short-term. Local currency risks can make it challenging to raise finance, for instance, while delivering the products to remote communities requires efficient local logistics and supply chain solutions.

In some countries, the legislative environment hampers off-grid power development, the conference heard. "There is no one Africa," said Valérie Levkov, senior vice president at EDF for Africa, the Middle East and Eastern Mediterranean region.

While in Togo, regulatory support helped boost solar installations, the Cote d'Ivoire government and its national utility initially pushed back against solar proposals, Levkov said. "If governments want to electrify rural areas, they have to provide subsidies," especially for the poorest people, she said. "It is all an education."

But a key profitability issue arises from the very nature of the off-grid business model. Under a typical pay-as-you-go solar concept, often poor families are equipped with costly solar kits, which they will pay back in regular installments, usually over the course of several years.

If families can no longer afford to pay and have to default, the provider is largely without recourse, said industry veteran Thomas Duveau. Now the co-founder of nonprofit industry research provider A2EI, Duveau had until recently been chief strategy officer at Mobisol GmbH, one of the largest players in the African off-grid market. The company went into self-administration earlier this year, before being acquired by French utility Engie in September.

According to Duveau, the environment for off-grid and pay-as-you-go developers in Africa is rife with risks beyond their control. "Exogenous cost is unhedged," he said, adding that companies are unable to react to risk factors such as climate change, rises in fuel tax or other disruptions to families' ability to pay electricity bills.

Speaking about the challenges faced by Mobisol and the sector at large, Duveau said, "As long as we don't solve this vulnerability, we are exposed to risk."

To manage and reduce that risk of default due to economic distress, some investors are casting their nets wider, injecting capital into ventures offering add-on services, including affordable health insurance and fertilizer.

Most of the time it is either crop failure, a delay in the harvest or a sickness in the family that causes a default on electricity bills, said Ademidun Edosomwan, emerging markets lead at Total Ventures, the venture capital arm of oil major TOTAL SA.

"These customers are really at the bottom of the pyramid — so with any shock to their income, the first thing that goes away is the payment for the solar home systems," Edosomwan said, adding that including services that address these dynamics can stabilize the returns on solar installations.

"For us as investors, what is important is really added value, added services," Edosomwan said. For instance, when people have health insurance, that income is not diverted towards hospital bills when a family member gets sick. After recognizing that link, the combination of health insurance or crop protection measures with electricity provision makes perfect sense, the emerging markets lead added.

Access to affordable and clean energy is number seven in the United Nations' Sustainable Development Goals for 2030.

"At the current pace of electrification, 650 million people are likely to remain without access to electricity in 2030, and 9 out of 10 of these people will live in sub-Saharan Africa," said off-grid solar industry association GOGLA in a September report. According to GOGLA, mini-grid and off-grid projects are a key element in reducing that number.

"The off-grid solar sector is still relatively young, and companies often operate in challenging and dynamic environments," GOGLA said. "This is why continued support for the sector is crucial."