US Leveraged Loan Issuance Totals $274B in 2018's First Half 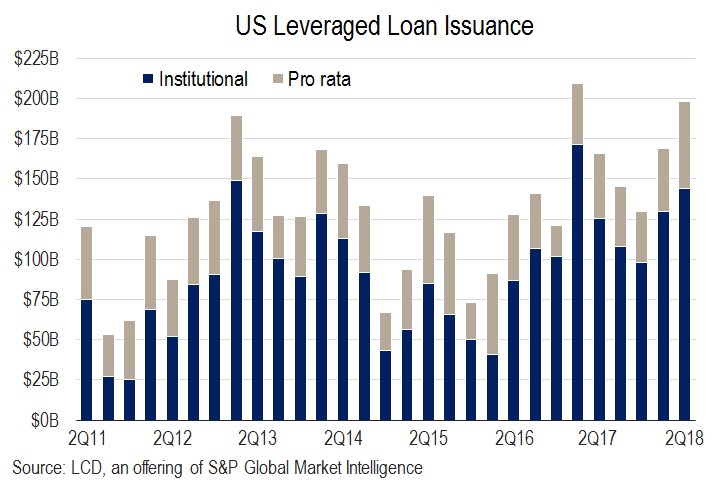 Issuance of U.S. leveraged loans totaled $274.4 billion in 2018’s first half, down only 8% from the record $297 billion seen during the same period one year ago, according to LCD.

While lagging the breathless pace set last year, we’ll note that the second half of 2017 saw a distinct downshift in issuance, compared to the first six months of the year, meaning if activity in 2018 continues near its current pace it could well set a record.

These numbers detail institutional issuance of U.S. leveraged loans, or higher-priced term debt that does not amortize, as opposed to revolving credits and amortizing term loans (pro rate debt). Including pro rate activity, U.S. leveraged loan issuance totaled $371 billion in 2018’s first half, on par with the record numbers in 1H17.

The U.S. leveraged loan market, which is accessed by speculative grade debt issuers, has been exceedingly hot over the past two years or so as investors pour money into the asset class in anticipation of rate hikes by the Fed. Such moves usually boost interest in floating rate asset classes.

As well, LIBOR has risen steadily over the past year, buoying yields on U.S. leveraged loans, even as the spreads over LIBOR charged to borrowers in the segment have decreased, due to the sustained investor appetite. – Staff reports