U.S. loan funds reported an outflow of $1.74 billion for the week ended Nov. 21, according to Lipper weekly reporters only. This is the second major outflow of the past four weeks, and just the eighth negative reading of 2018. 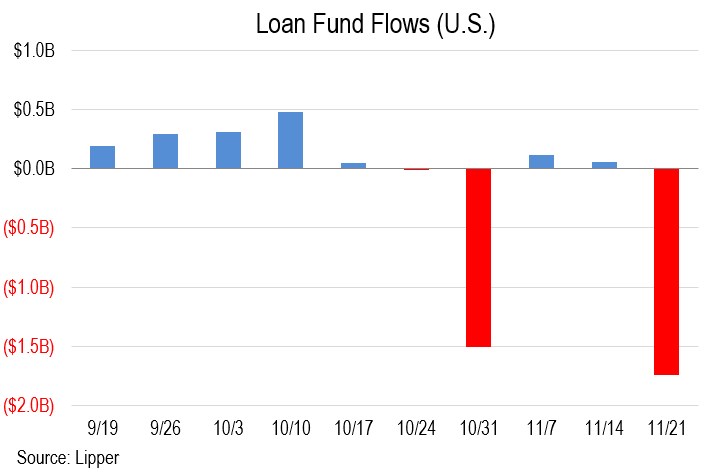 Last week’s outflow was the heaviest since the week ended Dec. 16, 2015 ($2.04 billion) and comes just three weeks after a $1.51 billion exodus over the last week of October (this excludes a nominal $1.3 billion mutual-fund outflow for the week ended Nov. 8, which came as the result of a reclassification at a single institutional investor).

With that, the four-week trailing average slumps to $767.8 million, its lowest level in nearly three years.

As with the other recent outflow, mutual funds led the way with $1.07 billion pulled out, while the total for ETFs was roughly $673 million. For ETFs that is the largest exit on record behind the $551.5 million loss for the week ended Oct. 31. Of note, ETF flows were positive in the weeks between, whereas mutual fund flows were negative for the fourth consecutive week.

While last week’s outflow puts a dent in the year-to-date total inflow, it remains a substantial $8.6 billion.

The change due to market conditions last week was a decrease of $774.3 million, the steepest decline since Dec. 16, 2015. Total assets were roughly $105.5 billion at the end of the observation period and ETFs represent about 11% of that, at roughly $12.1 billion. — Jon Hemingway