US High Yield Bond Market Stumbles Through Uninspiring May


US High Yield Bond Market Stumbles Through Uninspiring May 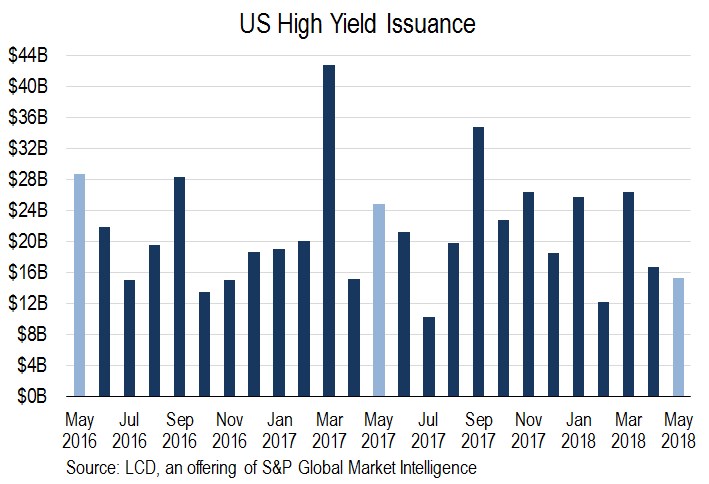 In what is typically an active period for the U.S. high-yield market, just $15.3 billion of deals were issued in May, making it the lightest volume for that month since the paltry $9.5 billion in recession-era May 2010, according to LCD. Muted issuance came amid the noisy breach of the 3% threshold by the 10-year Treasury, political issues in Italy, simmering geopolitical concerns, and a relatively early Memorial Day.

May’s supply was spread across 33 tranches, up slightly from the 29 tranches finalized in April, though April’s volume was higher, at $16.7 billion.

After gaining in April, following two consecutive monthly declines, the average yield for new issues again fell, dropping 22 bps, to 7.12% in May. This figure, though, is 27 bps higher than the year-to-date average for new issue yields, according to LCD.

YTD, U.S. high yield issuance totals $96.55 billion, down 21% from the $123 billion at this point last year, according to LCD. In contrast, the floating-rate leveraged loan market has seen $237 billion of institutional issuance. That’s down 10% from 2017 (which was a record year for loan issuance, at $503 billion). – Jakema Lewis