U.S. Leveraged Loan Repricings Get Boost from Issuers Returning for Round Two


U.S. Leveraged Loan Repricings Get Boost from Issuers Returning for Round Two

Leveraged loan repricings, which this summer took a breather from the torrid pace early in the year, are getting a boost in September from issuers who are returning for second helpings in 2017. 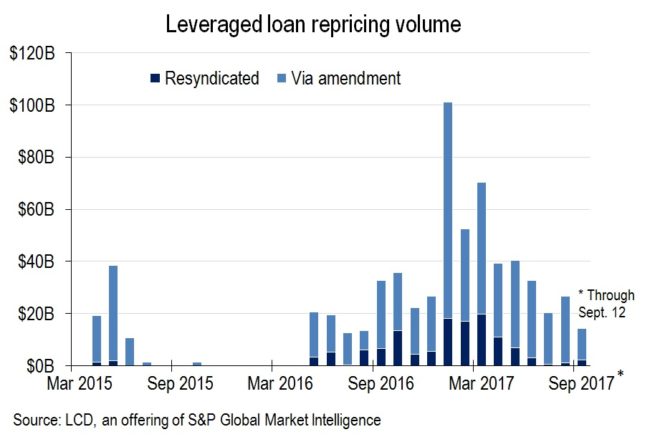 Most notable here is Allison Transmission, which on Tuesday launched a repricing of its B term loan that will lower its spread to L+175 from the current L+200 while leaving the 0% LIBOR floor unchanged. This would match the lowest pricing of a leveraged deal seen in 2017, according to LCD. Calpine printed a B-8 tranche at the same level in January, to repay bonds. The Allison deal would be the tightest level for a repricing since Constellation Brands in 2014 (L+175, no floor).

So far this year—pre-Allison—the tightest repricings were at L+200 (spread plus floor), and there have been a bunch. In fact, 36 tranches were repriced to that level in 2017, compared to none in 2016. As a share of total repricings, deals done at that level have risen to 12% in the third quarter, from 8% in 2Q and 9% in 1Q.

Allison, rated BB+/Ba1 by Fitch and Moody’s, returns to market after having repriced in March. It is not alone in making a quick turnaround. Of the 14 repricings launched so far in September (through Tuesday), 13 were in market earlier this year (Vantiv is repricing a deal from 2016).

This is not unexpected, of course, as call protection on the massive repricing wave of the first and second quarters begins to roll off. 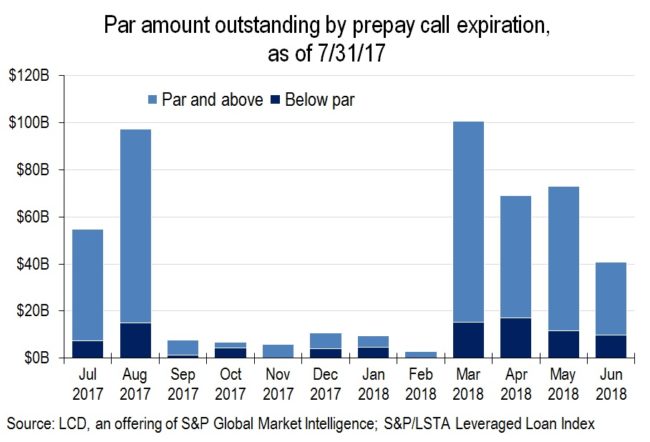 And with the repricing market increasingly composed of recent repeat offenders, overall cost savings are declining. For 3Q to date, issuers are saving 81 bps, down from 86 bps in 2Q and 92 bps in 1Q.

As mentioned, repricers are wasting no time returning to market. The average time between a repricing and the prior transaction has fallen to 10 months, on deals repriced from July through September. That’s down from 12 months in the second quarter and 15 months in the first.

More broadly, repricing activity has picked up from a relatively quiet August and July. So far in September there have been $14.3 billion in repricings launched ($5 billion of that is courtesy of Avolon). There were “just” $26.8 billion of repricings in August, the second-lightest month of such activity this year, behind July at $20.2 billion.

On a quarterly basis, however, the decline in repricing activity is dramatic. There has been $61.3 billion in repricing volume so far in 2017’s third quarter, down from $112 billion in the previous quarter and a surreal $224 billion in the first three months of the year. — Staff reports