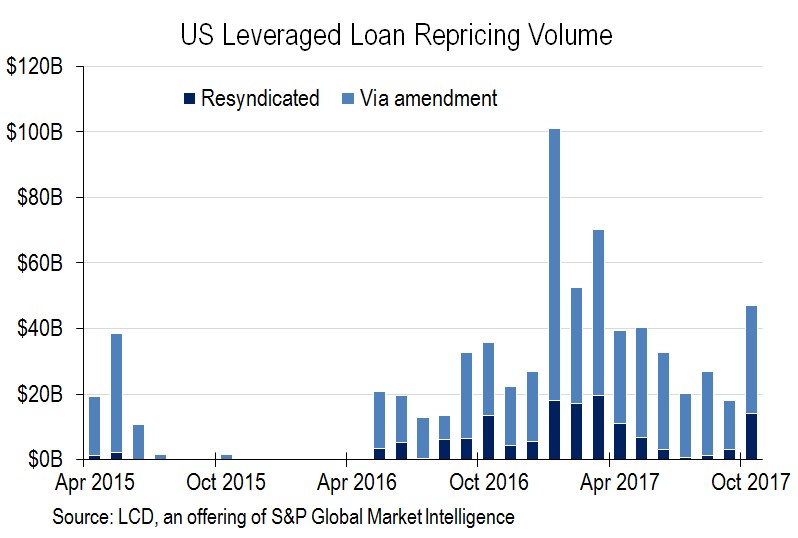 Aerospace component concern TransDigm this week is looking to wrap a $5.16 billion deal that would trim borrowing costs on existing bank debt, launching the most recent salvo in the year-long assault on rates in the U.S. leveraged loan market.

With the transaction, TransDigm – which has a corporate rating of B+/B1 – would cut the spread on its outstanding loan debt by 25 basis points, from 300 bps over LIBOR to 275 bps over, according to LCD. This would save the company some $13 million each year.

While TransDigm is the latest high-profile example – and the largest such deal in 2017 – it is barely a drop in the bucket.

Through October, there had been a staggering $450 billion of repricing activity in the U.S. leveraged loan market, according to LCD. This is easily the most ever, as borrowers across the speculative-grade ratings spectrum look to take advantage of intense demand from institutional investors, which remain starved for paper offering discernable yield.

Why are institutional investors so desperate?

Retail investors have poured billions into loan mutual funds and ETFs since mid-2016, in anticipation of Fed rate hikes (floating rate asset classes tend to fare well in rising rate environments), creating a net $13 billion inflow so far in 2017. While those inflows have stopped over the past month or so, as the prospects of additional rate hikes have dimmed somewhat, the appetite for leveraged loan paper remains intense. – Staff reports