Covenant-lite loans – the borrower-friendly debt instrument that some worry will hinder recoveries once the long-running bull-market credit cycle turns – have dominated the U.S. leveraged loan segment for several years now. 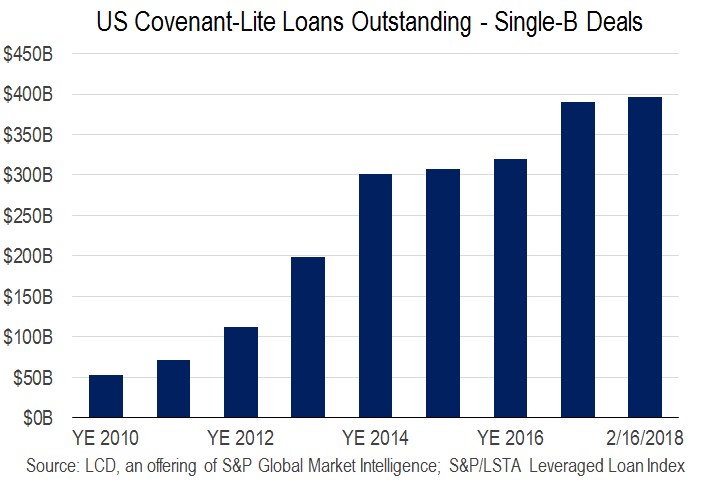 But as institutional investor appetite for higher-yielding assets continued hot throughout 2017, increasingly the cov-lite universe has become comprised of lower-rated, riskier, single-B credits.

Indeed, by the end of 2017 there was roughly $390 billion of single-B cov-lite loans outstanding, according to LCD. That’s far and away a record, and up dramatically from the $320 billion at year-end 2016 (the total had grown to $396 billion as of last week, by the way).

Just how strong has appetite been for these riskier deals, even without the investor protection that fully-covenanted loans offer? 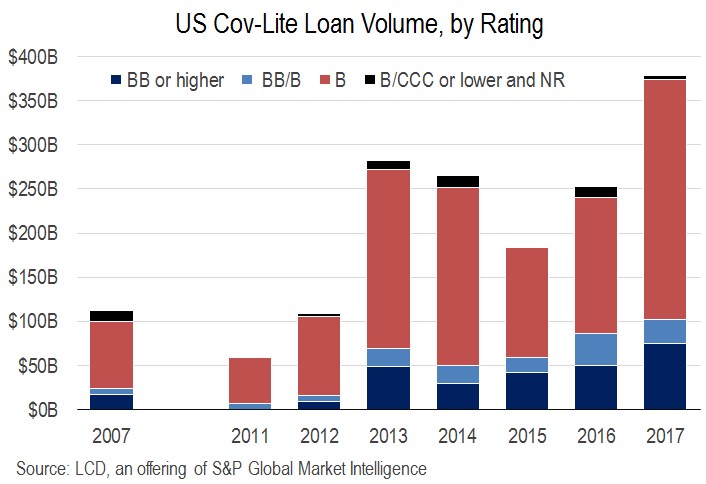 Single-B credits accounted for 72% of U.S. cov-lite issuance last year –or $272 billion – the highest share since 2012, when these deals took up 82% of the cov-lite segment. In 2012, however, this sample totaled a paltry $52 billion, as the U.S. leveraged loan market was still proceeding cautiously after the financial crisis, a few years previous.

Cov-lite activity in the single-B segment has continued into 2018. While issuance in that ratings category had dipped to 58% of all cov-lite deals so far this year, it was as high as 82% a few weeks ago, according to LCD.

Cov-lite loans less restrictive for a debt issuers, compared to traditionally leveraged loans. Their popularity has surged over the past few years, particularly as retail investors poured money into the loan asset class in anticipation of higher interest rates. – Tim Cross