U.S. loan funds reported an outflow of $2.53 billion for the week ended Dec. 12, according to Lipper weekly reporters only. This is the largest weekly outflow on record for loan funds, topping the prior mark of negative $2.12 billion from August 2011. 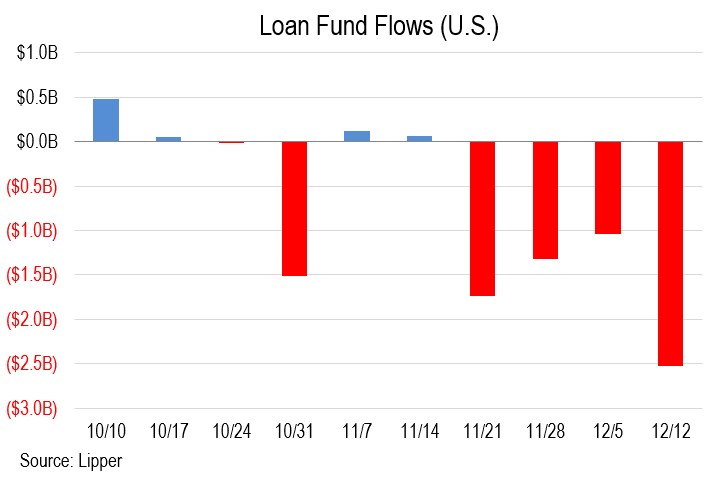 This is also the fourth consecutive week of withdrawals, totaling a whopping $6.63 billion over that span. With that, the four-week trailing average is now deeper in the red than it’s ever been at $1.66 billion, from negative $1.01 billion last week.

Mutual funds were the catalyst in the latest period as investors pulled out a net $1.82 billion, the most since August 2011. Another $704.9 million of outflows from ETFs was the most ever.

Outflows have been logged in six of the last eight weeks and that has taken a big bite out the year-to-date total inflow, which has slumped to $3.7 billion after cresting $11 billion in October.

The change due to market conditions last week was a decrease of $1.231 billion, the largest drop for any week since December 2014. Total assets were roughly $99.3 billion at the end of the observation period and ETFs represent about 11% of that, at roughly $10.9 billion. — Jon Hemingway