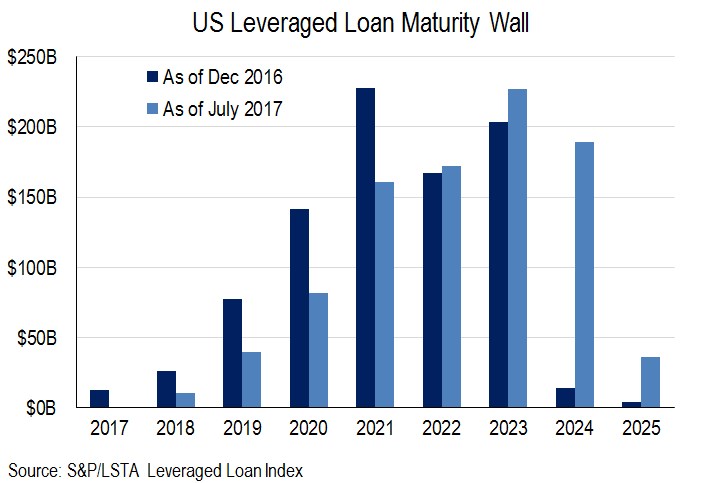 Credit market bears who say corporate America is kicking the debt can down the road might have another talking point.

The U.S. leveraged loan maturity wall – when speculative-grade borrowers will have to address credits coming due en masse – has been pushed back considerably in 2017 as issuers take advantage of ever-accommodating institutional investors to refinance nearer-term debt.

Indeed, at the start of this year some $26 billion of U.S. leveraged loans were set to mature in 2018; that number has been more than halved, to $10.3 billion as of today, according to LCD. The Maturity Wall really begins to evaporate in 2020; loans coming due that year have been reduced from $141 billion as of January to $82 billion today. And for 2021, the number has been reduced from $227 billion to $161 billion.

Why can leveraged loan issuers push the Maturity Wall further out on the horizon? Mostly, because they can borrow so easily now.

This year alone there have been some $137 billion in U.S. leveraged loan refinancings, already topping the $120 billion seen in all of 2016. These deals enable companies with loans coming due, often in the next few years, to set back the maturity date of the credits perhaps six or seven years from now (often reducing borrowing costs in the process).

The exceedingly issuer-friendly U.S. leveraged loan market has made all this refinancing activity possible. Starting in mid-2016, institutional investors began to pour cash into U.S. loan funds in anticipation of rising interest rates (floating-rate assets such as loans tend to be more attractive to investors in a rising rate environment, of course).

This dynamic has left loan funds sitting atop a veritable mountain at cash – net inflows have totaled nearly $15 billion so far in 2017, according to Lipper – creating a decidedly borrower’s market. – Tim Cross