With Spotlight on Guidelines Fading, Leverage on US Loans Creeps Higher


With Spotlight on Guidelines Fading, Leverage on US Loans Creeps Higher 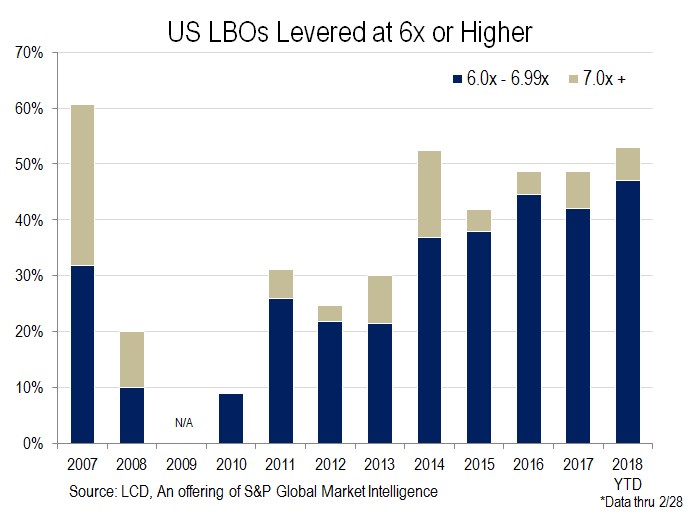 Leverage in the U.S. loan market continues to creep higher.

The share of LBO loans with debt/EBITDA of at least six times – a level specified by Federal agencies in 2013 as meriting “special concern” – has just reached its highest point since the financial crisis, according to LCD.

The surge in these deals comes amid sustained institutional investor demand for higher-yielding assets. Consequently, lenders and investors have been accommodating to leveraged loan issuers of all stripes over the past few years, doling out covenant-lite credits and rapid repricings in record fashion.

Leveraged lending guidelines for U.S. banks, laid out by Federal agencies in 2013, have returned to the headlines of late,  most recently when Comptroller of the Currently Joseph Otting said that banks “have the right to do what [they] want” regarding leveraged lending (as long as those actions don’t impact “safety and soundness,” that is).

Those guidelines stated that  loans with debt to EBITDA of six times or more would merit special concern, prompting banks under the watchful eye of the Fed to pull in the reins on highly leveraged deals.

To a degree, anyway. Turns out, leverage on loans backing U.S. LBOs have been creeping higher over the past several years, to the point where roughly  53% of LBOs for large corporate borrowers had pro forma leverage of 6x or higher so far this year, a post-crisis high (2014 came close, at 52%). For reference, 2007 continues to hold the record, when 61% of buyouts fell into this category. – Tim Cross