The covenant quality of high-yield new issues reached an all-time low in the third quarter, as measured by the FridsonVision series. Moody’s series, of which ours is a refinement, bottomed out in the second quarter. For reasons detailed below, the two series diverged in September, with FridsonVision’s showing minor improvement versus August’s reading, while the Moody’s series deteriorated slightly, month over month. 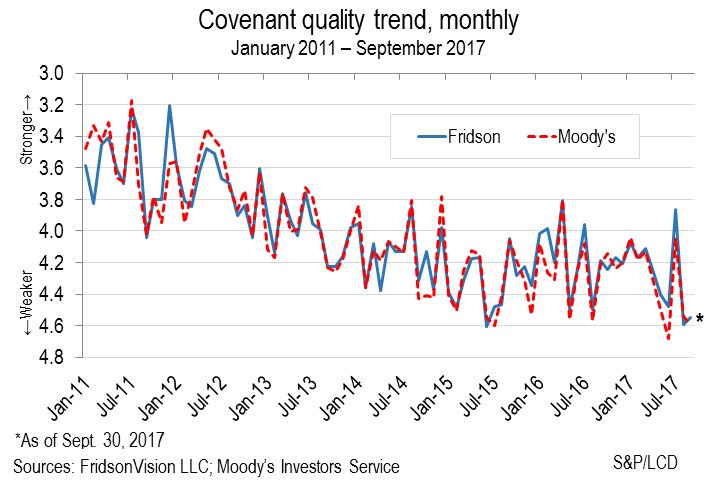 To provide background, “Covenant quality decline reexamined” ($) describes how we modify the Moody’s CQ Index to remove noise arising from month-to-month changes in the calendar’s ratings mix. On average, covenants are stronger on triple-Cs than on single-Bs, and stronger on single-Bs than on double-Bs. Therefore, for example, if issuance shifts downward in ratings mix in a given month, without covenant quality changing within any of the rating categories, the Moody’s CQ Index will show a spurious improvement. We eliminate such false signals by holding the ratings mix constant at an average calculated over a historical observation period. 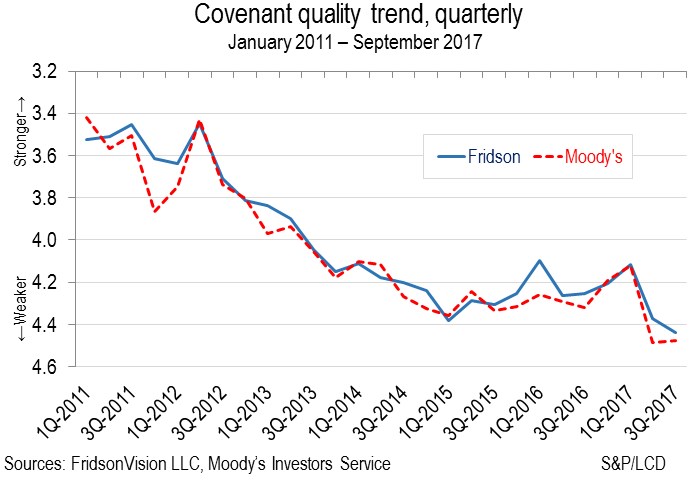 The opposite of the effect described just above occurred in September (see chart below). As the double-B component expanded from 24.0% of all issues in August, to 38.2% in September, Moody’s series worsened from 4.54, to 4.59 (1 = Strongest, 5 = Weakest). Filtering out the impact of monthly variations in ratings mix, the FridsonVision series showed a similarly sized improvement from 4.59, to 4.55.

On a quarterly basis, though, the pattern was reversed. The FridsonVision series deteriorated from 4.37 in August to an all-time low of 4.44 in 3Q17. This series’ previous worst score was 4.38 in 1Q15. Meanwhile, the Moody’s series improved slightly from its all-time quarterly worst 4.49 in 2Q17 to 4.47 in 3Q17 (see chart below). That seeming improvement in covenant quality reflected an unusually heavy concentration of issuance in the double-B category in 2Q17 and a return to about an average concentration in 3Q17. – Martin Fridson