Fridson - Amid Tesla Talk: Is a $72B LBO Feasible?

Within hours of Elon Musk tweeting on Aug. 7 that he was considering taking Tesla private, analysts concluded that if it happened, it would not be by the route of a conventional leveraged buyout. The automaker’s CEO instead expected a substantial portion of existing stockholders to trade in their public shares for more highly valued private ones, with as-yet-unidentified sources providing additional financing. In any case, the company’s negative cash flow was generally seen as an unsuitable basis for a heavily debt-financed transaction.

Experts who weighed in on the headline-grabbing affair also debated whether it was even possible to create an LBO as large as a Tesla buyout would be. The most frequently cited figure for Tesla’s size, derived by multiplying the number of outstanding shares by Musk’s proposed $420/share valuation, was $72 billion. Numbers ranging from $70 billion to $82 billion were published, however. In any event, commentators generally cast doubt on the feasibility of such a large transaction, given that the biggest previous LBO was the $44.4 billion TXU deal in 2007.

Barron’s (see note 1) spotted the basic flaw in that comparison, which is the failure to take inflation into account. It might be that a nominal amount that would have strained the market many years ago could be raised fairly easily with today’s cheaper dollars. The business weekly’s “Up and Down Wall Street” columnist Randall Forsyth put the TXU deal’s value in current terms at $53.5 billion.

Even that figure understates what leveraged finance has been capable of in the past. Business Insider’s 2015 list of the largest LBOs of all time (see note 2) ranked the 1989 RJR Nabisco deal #1. This source shows the nominal deal size at $31.1 billion and translates that into $59.6 billion in inflation-adjusted terms. By that measure, the 2007 TXU deal ranks second at $50.9 billion. According to our calculations, derived from the Consumer Price Index, the inflation-adjusted value of the RJR Nabisco deal now stands at $63.2 billion. Suddenly, a $72 billion deal, for a company that fits the LBO profile better than Tesla does, seems less of a flight of fancy than it did at first blush.

But wait, there’s more!
The U.S. high-yield market is much bigger now than it was in 1989, and not solely as a function of inflation. On Dec. 31, 1989, the face amount of the ICE BofAML US High Yield Index stood at $141.637 billion. The comparable current figure is 8.8 times as great, at $1,251.920 billion. Even excluding the impact of inflation, the outstanding size of the high-yield market is 4.4 times what it was in the year of the RJR Nabisco deal, by our calculation. 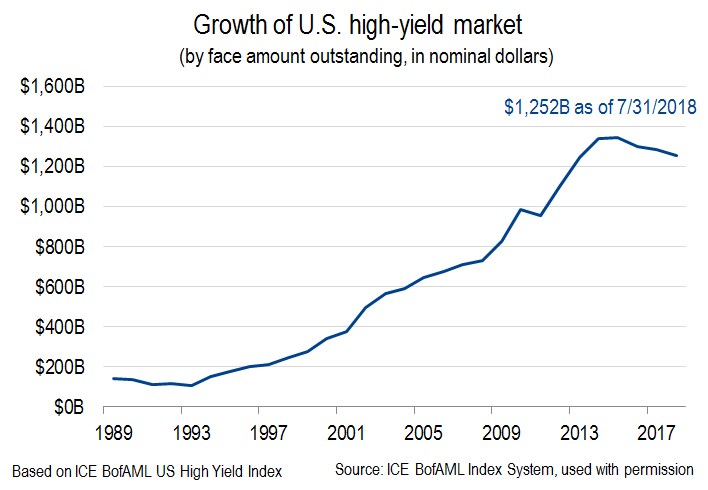 If a $72 billion LBO were to be financed entirely in the U.S. high-yield bond market, with equity accounting for 30% of the capital structure, the deal’s bonds would account for 3.9% of the ICE BAML High Yield Index. (This calculation takes into account the increase in the denominator resulting from the buyout’s assumed $50.4 billion issuance.) That percentage is below the typical 5% maximum concentration per issuer allowed for high-yield funds. In practice, portfolio managers tend to self-impose lower per-issuer caps, but it is hardly likely that the U.S. high-yield market would be called on to finance the entire debt portion of the deal.

For one thing, the leveraged loan market, too, has grown a good bit since 1989. In 2017, for example, LCD reports that leveraged loan issuance totaled $649.8 billion, up from $187.7 billion in 2000. The 2017 loan volume exceeded the high-yield total of $276.3 billion. In addition, the European high-yield market, which barely existed in 1989, now stands at $389.945 billion (face amount) as measured by the ICE BofAML European Currency High Yield Index. At its Dec. 31, 1997 inception, that index’s face amount was a mere $1.197 billion. All in all, financing sources outside the U.S. high-yield market appear likely to reduce the burden to a point where U.S. managers would not have to allocate excessively to the name in order for the deal to get done. By the same token, many managers would be reluctant to underweight a name that could potentially have a major impact on their performance benchmark.

There may not be a Tesla-size LBO waiting in the wings, but it so happens that now would not be a bad time to try it. Private equity firms have more than $1 trillion in their war chests, according to data provider Preqin, so it would not be hard for the right deal—or even a semi-right deal—to attract the necessary equity financing. Investors’ appetite for high-yield paper is currently whetted by a reduction in supply. The ICE BAML High Yield Index’s face amount is down by 9% from its peak of $1.38 billion in March 2016.

Bottom line: Tesla would be the wrong company to test the proposition, but a $72 billion LBO is not out of the question. In nominal terms, that is 62% bigger than the biggest dollar deal ever done, but feasibility is also a function of inflation and growth in the debt markets. If the right target company were to appear, right now might be a good time to attempt the seemingly impossible.