The Federal Reserve’s liquidity program spurred a staggering relief rally from the depths of the coronavirus-induced global market meltdown: the rebound halved losses in the weighted averaged bid of the S&P/LSTA Leveraged Loan Index, which was at 96.72 to start the year, bottomed out at 76.23 on March 23, and rebounded to 86.69 through April 21. Although the Fed's actions only benefited loan issuers at the margin, it has brought about stark differentiation across the quality buckets.

According to LCD, 57% of outstanding U.S. leveraged loans rated single-B are priced at 90 and above, compared to 92% of double-B loans. 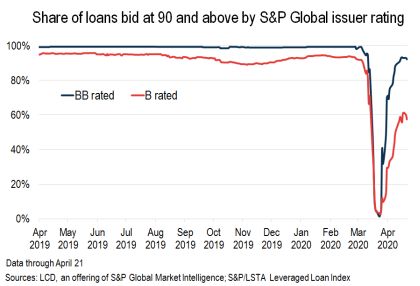 Breaking it down further, in the "98 to below par" bracket, the share of both single-B and BB loans remains low by historical standards. This is unsurprising, given that loan prices have hovered around 85 for much of April. From the BB cohort, just 5% of loans are priced in the 98–par bracket, and just 1% for single-Bs. This compares to 79.1% and 50.1%, respectively, at the end of February.

In the 95–98 bracket, the bifurcation becomes more apparent, with only 21% of single-B loans bid in this range, versus 62% of BB loans. The differential peaked at 41% on April 16.

During the height of the indiscriminate March sell-off, this differential was just half a percent. 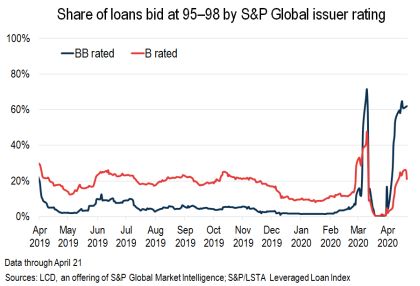 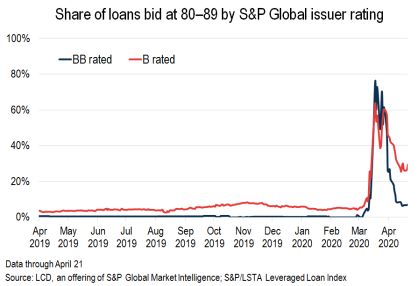 The dispersion could perhaps be explained by accounts chasing lower-levered, Fed-eligible issuers, but as recent analysis from LCD has shown, a large swath of the market is essentially precluded from the Fed’s lending program. Regardless, accounts are clearly rewarding companies with stronger fundamentals, and punishing those closer to the brink.

Indeed, in distress, 5.3% of single-Bs were priced below 70 as of April 21. At the end of 2019, almost no single-B loans were bid below this level. Of course, no BB issuers are priced this deeply in distress. Below 80, 1% of BBs are priced below this level, versus 13% of single-Bs. At the end of February, this was 0.56% and 3.30%, respectively. This reset of levels comes as the overall jump in distress is expected to result in a rapidly rising default rate.

Looking at the broader picture, the pricing wedge between high-quality and more storied credits deepened, with the average bid of outstanding loans rated CCC recovering only 4.4 points from the March 25 low of 62.71. Single-B loans, meanwhile, recovered 10.5 points from a March 24 low of 76.90, and BB loans by 14.7 points from the March 23 low of 78.15. 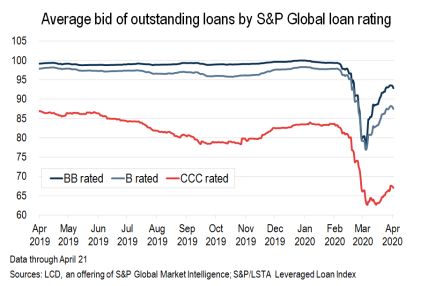 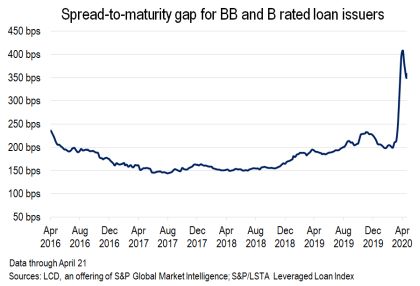 CCC loans – which have unsurprisingly been hit by rising missed interest payments and defaults in recent weeks, and have to contend with CLO constraints – returned 2.15% for the month-to-date reading as of the April 21 close. 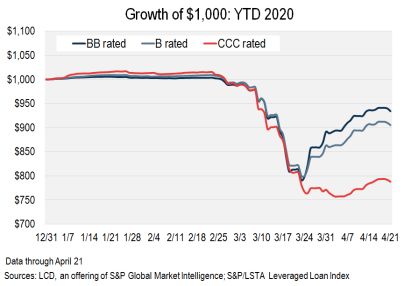 In this current downgrade cycle, the rating mix of the loan index continues to worsen.

The S&P/LSTA Leveraged Loan Index share rated B– or lower climbed to 32% as of April 17, the highest tally ever and another record monthly jump. 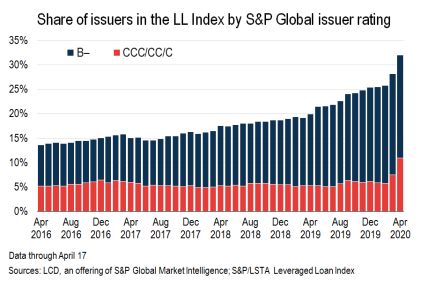 In another ominous record, the CLO pain-point of CCC and CC loans now make up a staggering 11% of the index. This compares to just 2.7% five years ago.

Meanwhile, U.S. retail funds investing in leveraged loans saw four consecutive weeks of more than $2 billion in redemptions in March. The $3.5 billion withdrawn in the week through March 18 was the largest outflow since the final week of 2018, according to Lipper weekly reporters. 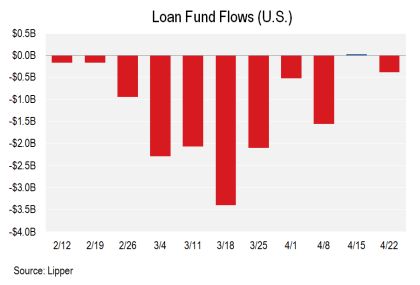 At the same time, loan repayments fell dramatically. In March, issuers repaid $11.4 billion, versus $45.5 billion in February (which was the third-highest monthly total on record). 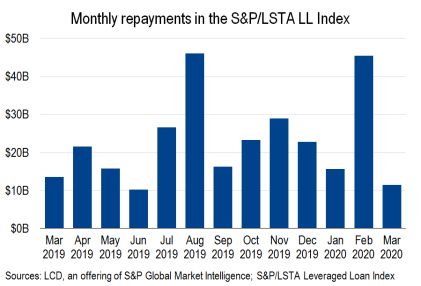 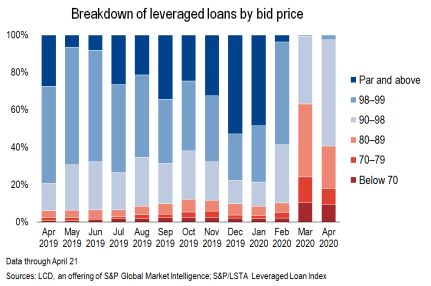 And finally, anecdotally, there have been no loans bid above par at the closing levels since March 13 – a 28-day stretch not seen since LCD first tracked this data in 2012.