Retail investors pulled $1.36 billion from U.S. loan funds during the week ended March 27, the largest outflow since the week ended Jan. 2. This marks the nineteenth straight outflow for a total of $23.6 billion over that span, according to Lipper data.

The acceleration in the retreat from the asset class comes as the chances of rate hikes in 2019 – a scenario that traditionally benefits floating-rate assets such as leveraged loans – dims. Indeed, the loan market now sees a roughly 63% chance of a cut in rates by year-end, according to CME. That's a decided switch in sentiment from only recently. 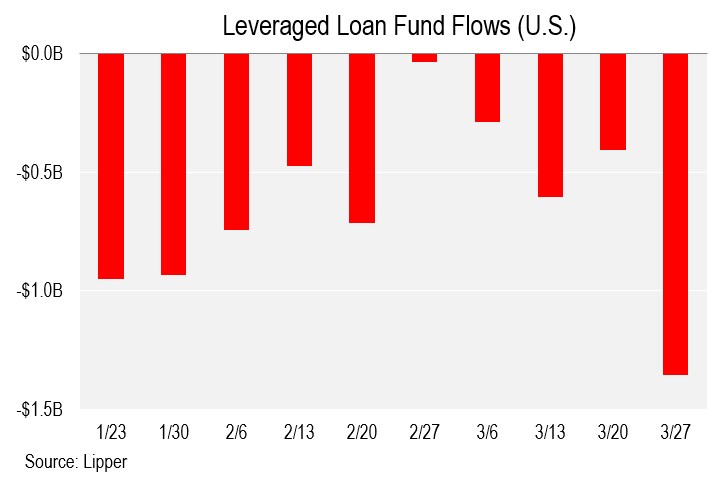 This latest reading dwarfs recent outflows. In fact, the four-week trailing average on March 20 was the closest to positive it had been since Nov. 14, at negative $334 million. With this outflow it is now negative $665 million, the steepest level since Feb. 20.

ETFs packed a wallop this week with a $756 million outflow, the largest on record. Mutual fund outflows hit a five-week high, at $601.3 million.

The change due to market conditions during the week was also negative, by $419 million, the third week out of the past four that it has been in the red.

Year to date, including the week ended Jan. 2, retail investors have withdrawn a net $10.1 billion from U.S. loan funds. Assets at the loan funds now total $83.8 billion, of which $9.4 billion (11%) come via ETFs, according to Lipper. —Jon Hemingway