U.S. leveraged loan funds recorded a net outflow of $525 million in the week ended June 29, according to the Lipper weekly reporters only. This is the largest one-week redemption in 18 weeks and it builds on two weeks of outflows, for a combined redemption of $682 million over the three-week span. 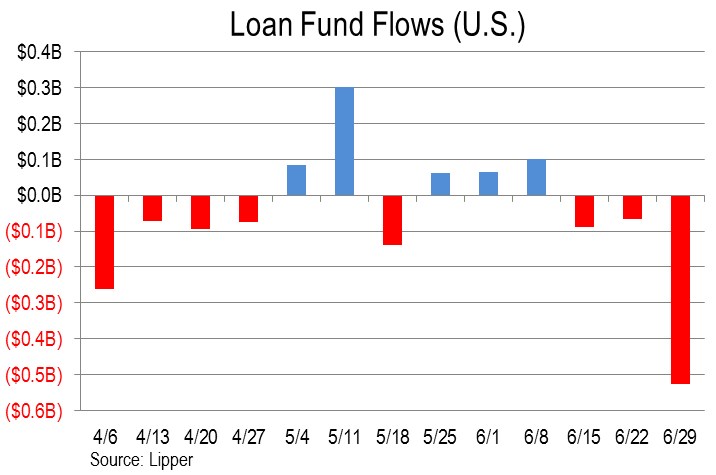 Today’s reading reflected an outflow of $589 million from mutual funds filled in a bit by inflows of $64 million to ETFs, or inverse 12%. Last week it was similar, but larger, at inverse 24%.

With a fresh redemption this week, the trailing four-week average slips into the red, at negative $145 million, from just positive $2 million last week. The current observation is the first in the red in nine weeks.

Year-to-date outflows from leveraged loan funds are now $5.6 billion, with $6 billion of mutual fund withdrawals countered by $477 million of ETF inflows. A year ago at this juncture, there had been $4.1 billion of outflows, with 4% tied to ETFs.

The change due to market conditions this past week was minimally negative, at $248 million, or roughly 0.4% against total assets, which were $60.9 billion at the end of the observation period. ETFs represent about 10% of the total, at $6.2 billion. — Matt Fuller