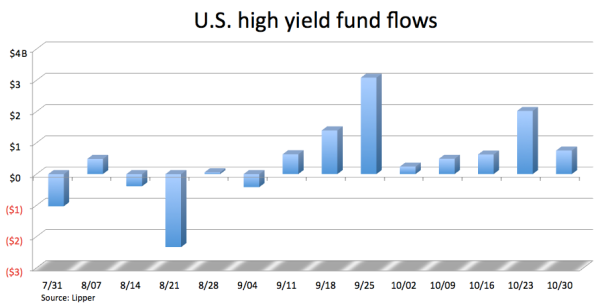 Retail cash inflows to high-yield funds contracted to $753 million for the week ended Oct. 30, from $2 billion last week, and ETFs again were a huge influence, at 67% of the total, versus 72% last week, according to Lipper, a division of Thomson Reuters.

It’s the eighth straight week of inflows for a total of $9.2 billion over that span. The four-week-trailing inflow average expands to $972 million per week, from $843 million last week, and $1.1 billion in the week prior.

Seven weeks ago, during the depths of cash withdrawals over the summer, the year-to-date reading was for outflows of $7.6 billion.

Net assets of the weekly reporter sample totaled $170.3 billion at the end of the observation period, with ETFs representing roughly 21% of the total, at $36 billion. Net assets are up $8.3 billion in the year to date, a gain of 5% for the year.