High-yield issuance in August was $10.2 billion, barely surpassing the $10 billion of volume in July but outpacing the $3.1 billion priced last August, LCD data shows. Note that issuance concluded on Aug. 19, when KIK Custom Products priced the last deal before the late summer shutdown. August is now the second slowest month of the year, next to July, with June the third slowest month at $21.2 billion. For the year-to-date, volume in 2015 through August is 1.4% behind last year’s pace, at $205.85 billion versus $208.80 billion. That gap has narrowed from the 5% decline at the end of July, but prior to July, volume had been running ahead of the pace for 2014.

Recall July’s slowdown was tied to commodities volatility, China’s stock market plunges, and early in the month, fears of a default in Greece. In August, those issues, apart from Greece, took an even greater toll on the market, and the debate continues over whether the Fed will raise interest rates in September. More participants are taking the view, given the latest disruptions in global markets, that it won’t.

Had the high-yield primary market not already shut down by Aug. 19, the tough conditions late-month would have certainly prevented issuers from tapping the market regardless. Already, several of the 19 deals that priced in August had to come with healthy concessions as investors pushed back amid tough conditions. As seen in June and July, the bulk of issuance came from time-sensitive M&A and LBO issuers, to represent 39% of total volume for the month, although dividend and recapitalization/stock repurchase use of proceeds both grew as compared to previous months. 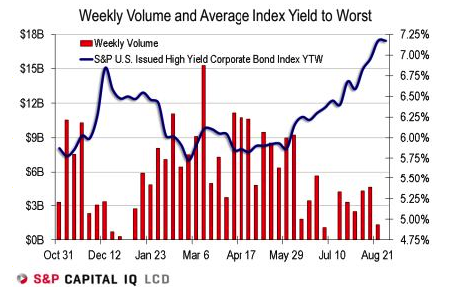