Only on the brink of the massive price collapse of the Great Recession in 2008 has the high-yield market ever been as overvalued as it currently is, according to our Fair Value Model.

As of Sept. 30, the option-adjusted spread (OAS) on the BofA Merrill Lynch US High Yield Index was 497 bps. That amounted to a gap of negative 265 bps versus our fair value estimate of 762 bps, a difference of –2.1 standard deviations, where one standard deviation equals 126.3 bps. (Grantham, Mayo, Van Otterloo has proposed a general definition of a bubble in financial markets as a divergence of –2 standard deviations from intrinsic value.) 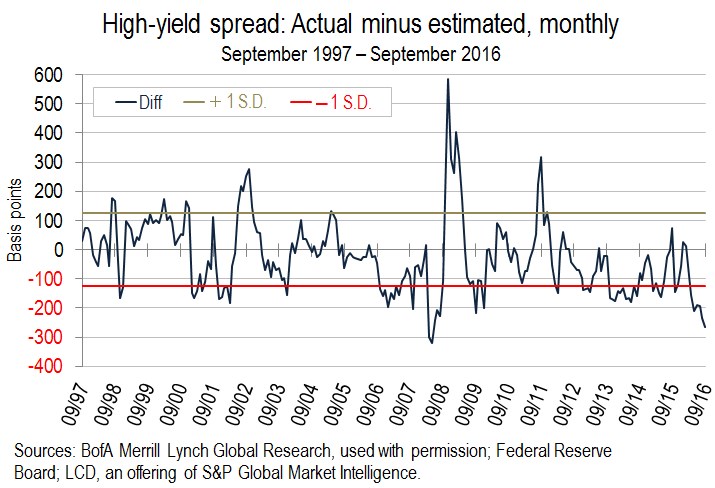 Following the record overvaluation of the spring of 2008, the high-yield market did not return to fair value until October 2008, when the BAML High Yield Index’s OAS widened by an astounding 521 bps in a single month. Ominously, from April 30 to Oct. 31, 2008, the BAML High Yield Index returned –25.94% while the BofA Merrill Lynch US Treasury Index returned 1.79%. We do not foresee conditions comparable to those of 2008 any time soon, but high-yield’s currently extreme overvaluation nevertheless sounds a loud cautionary note.

By way of background, our basis for determining whether the U.S. high-yield market is fairly valued is the methodology introduced in “Determining fair value for the high-yield market.” We are now using an updated analysis to reflect revisions to originally reported economic data, based on a historical observation period of December 1996 to December 2012. – Martin Fridson