WarnerMedia and other major programmers sharpen the hatchet


WarnerMedia and other major programmers sharpen the hatchet

Major media giants continue to announce sweeping layoffs such as AT&T Inc.'s WarnerMedia division, which had been planning such a move since August. The expected layoffs likely had many employees on edge as the U.S. economy struggles under the pressure of the COVID-19 pandemic.

On Nov. 10, CEO Jason Kilar sent an email to staff announcing a town hall the next day in which U.S.-based employees facing termination would get the news. Kilar said the international impact would be announced over time and characterized the layoffs as "a function of removing layers and the impact of consolidating previously separate organizations."

Although AT&T has yet to put an exact number on the expected cost savings, it has been widely reported in the press that 5% to 7% of WarnerMedia staff would be let go, or roughly 1,500 employees, including JP Richards, the co-president of worldwide marketing.

As we noted in our recent report on total selling, general and administrative costs by network, 148 cable networks are estimated to cut almost $400 million from SG&A expenses this year, with just a handful, such as ACC Network, FOX News Channel and Hallmark Drama, adding to infrastructure costs.

This analysis expands on that story, looking at SG&A costs on a per-subscriber basis. The trend quickly becomes evident that large, established cable networks still have some fat to trim, even after years of keeping costs in check or implementing early retirement programs and layoffs.

The problem is that small and midsize networks are already operating on shoestring budgets and have little wiggle room to shave millions of dollars in overhead. While many cable nets have found some savings by moving to a mostly work-from-home business model, there are few other areas to turn to for cutting costs. 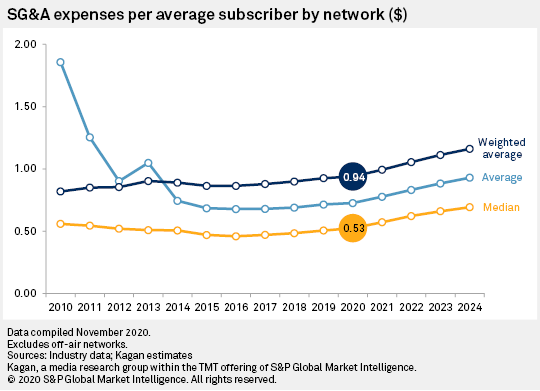 The largest channel in this metric is ESPN, which has already announced significant cuts to overhead this year, at $6.48 per sub. The sports giant is followed by CNN, Nickelodeon/Nick At Nite, USA, Disney Channel, FOX News, and in the Nos. 7 and 8 spots, WarnerMedia Channels TBS and TNT.

For a full listing of SG&A expenses per average subscriber by network, click here.

Most major cable networks will be able to survive this era of cord-cutting and cord-shaving by expanding over-the-top offerings and getting more carriage with virtual platforms. As we have been saying for years, however, the market for small to midsize cable networks remains bleak.