With approximately 76% of residential wireline broadband subscribers taking download speeds of 100 Mbps or higher at the end of 2019, U.S. households were relatively well prepared to face work-from-home, e-learning and daytime kids entertainment streaming conditions ahead of the COVID-19 pandemic.

However, the analysis is a mixed bag across cable/telco lines, with cable high-speed data households ahead in the speed lane.

We estimate that of the approximately 76% of residential wireline broadband subscribers taking download speeds of 100 Mbps or higher at the end of 2019, about 9% of the universe subscribed to 1-Gig tiers.

Only an estimated 3% of wireline high-speed data households were under the 25 Mbps threshold. 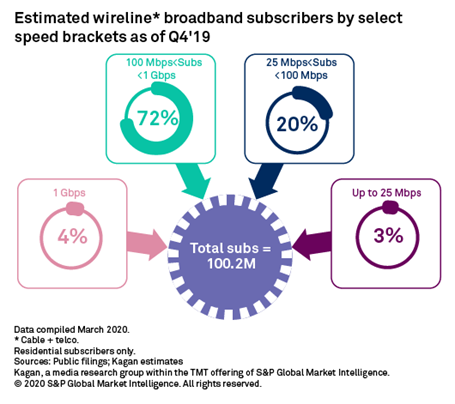 This is a significant improvement year over year, essentially due to the telco sector's accelerating transition to fiber, cable's sustained effort to improve speeds and the average consumer's seemingly insatiable need for faster speeds in the age of streaming media.

The percentage is relatively low, but in March 2020, the figure takes on a different significance.

It translates into over 3 million U.S. households that may be facing telecommuting and online education headwinds, not to mention difficulties streaming video content for entertainment purposes.

For those households, which are typically more vulnerable economically, moves to make theatrical releases available for streaming at home may not resonate as much as with those at the top of the speed pyramid.

That said, over-the-top leader Netflix recommends a minimum download speed of 3 Mbps to stream in standard definition. However, ultra high definition quality does require 25 Mbps down.

On a separate note, cord-cutting trends are more acute among lower-income households, resulting in traditional multichannel penetration rates significantly below the national average. This component magnifies the strain that may be put on broadband usage during COVID-19 confinement measures for this segment of the population.

Telcos serve the vast majority of those lower-download-speed households.