Recessionary economic environment and rising cost of living could cause OTT subscriber growth to stall in 2022; become negative in 2023 before turning positive again leading up to 2026.

Netflix Inc., Amazon.com Inc.'s Prime Video and Comcast Corp.'s NOW lost subscribers for the first time since launching in the UK in the second quarter.

Inflationary pressures caused mainly by sharp increases in energy costs could cause growth of OTT video subscriptions in the UK to stall and even drop to single negative digits over the next 18 months before lifting again. This is in line with the Bank of England's current forecast of a recession lasting until the end of 2023 and inflation reaching 13% toward the end of 2022. Kagan projects stand-alone subscriptions to peak at 38.6 million by the end of 2026, with growth driven mainly by U.S.-based services stretching their market shares through the adoption of hybrid revenue models and consolidation. 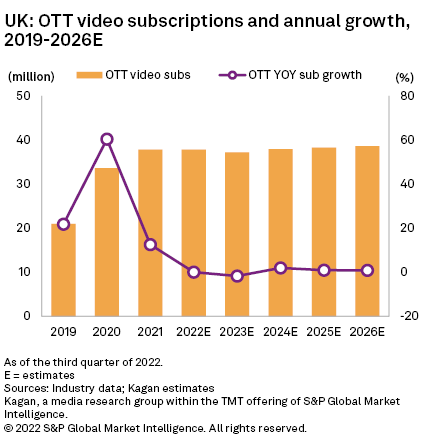 Our latest consumer survey found that in 2021 OTT usage stood at 51% of internet households, a drop of 11 percentage points compared to 2020. We attribute this to consumers spending more time outside their homes as COVID-19 restrictions had eased as well as the service's generalist nature. While the initial reduction in usage did not translate to subscribers canceling right away, a drop in consumer confidence following the Russian invasion of Ukraine and Netflix raising prices for the second time in the last couple of years led to approximately 510,000 subscribers canceling the service. This is equivalent to a 3% subscriber loss after having peaked in the first quarter at just under 17 million. Netflix will be launching an ad-tier plan at some point in 2023 in select markets. We believe the UK will be on that list and that should eventually get the service back to a growth trajectory over the mid- to long term.

Both Amazon.com Inc.'s Prime Video and Walt Disney Co.'s Disney+ have been closing the gap with Netflix over the last few quarters due to the growth in the number of Prime members who get access to Prime Video, the acquisition of premium live sports by Amazon and a continuous slate of original scripted titles by Disney. Even so, they did not manage to avoid subscribers churning. 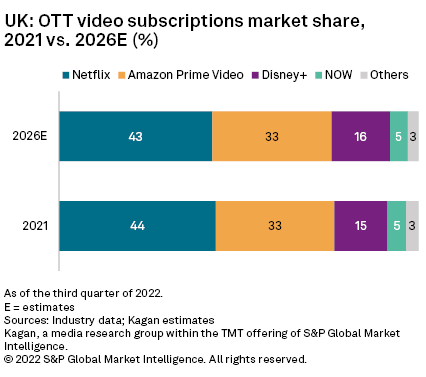