Free ad-supported OTT TV services have seen heavy growth in the last year as services such as Roku Inc. and ViacomCBS' Pluto TV

In October 2020, Tubi launched its first live broadcast TV stations since it began with on-demand service in 2014. The service has a total of 48 live TV stations streaming, reaching 83.4 million households, with more stations slated to be live in the coming months, according to our data as of Aug. 25, 2021. While Tubi is still a long way from the 996 live TV stations that subscription-based YouTube TV offers across all 210 TV markets, it already has more live stations and TV markets than DISH's Sling TV. 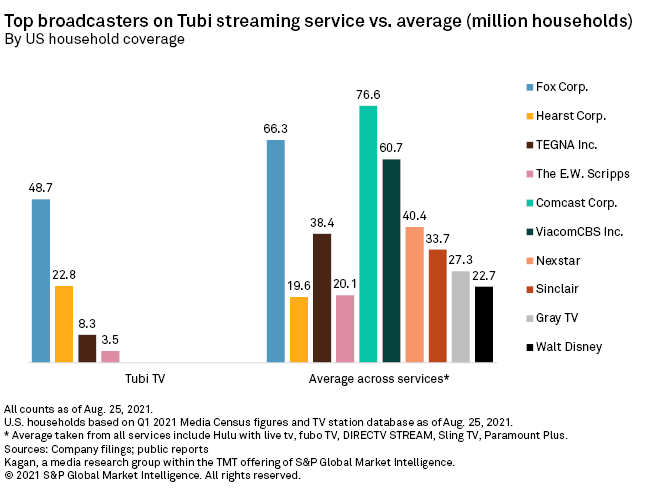 Free ad-supported OTT TV services have seen heavy growth in the last year as services such as Roku Inc. and ViacomCBS' Pluto TV reported exceptional user growth and ad revenue results. ViacomCBS said on its second-quarter earnings call held Aug. 5 that it raised its monthly active user base to 52 million while streaming revenue more than doubled year over year, reaching $502.0 million in the period. Revenue for Pluto TV is expected to generate $1 billion in revenue in 2021. 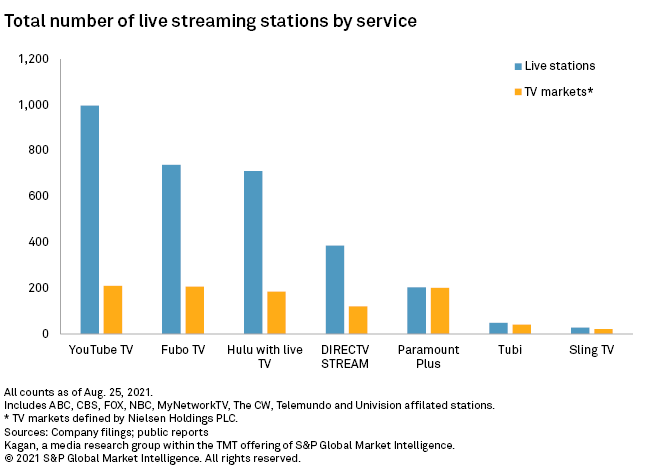 Like Pluto, Tubi grew its user base by 30.0% year over year in Fox's fiscal third quarter to 40 million as of March 2021. Total view time was up nearly 50% year over year in the quarter, according to Fox's earnings call held May 5. The company has stated that revenue for Tubi should surpass $1 billion in coming years with the service expected to grow to between 3 million and 5 million subscribers by 2026 according to FuboTV CEO David Gandler.

Fox intends to invest in the range of $200 million to $300 million of net EBITDA on the acceleration of digital assets and a particular focus on Tubi, FOX Nation and FOX Weather, Tomsic said. For Tubi, that means some investment in Tubi originals. However, the investment is going toward the three core pillars of content, user acquisition/marketing and technology, according to the Fox earnings call.

The growth of OTT TV has led to some interesting techniques to draw new subscribers. Sling TV partnered with DraftKings Inc. to roll out a new sports betting information channel. The channel will give real-time game scores and betting odds for sports, leveraging the DraftKings sportsbook.

In January, fuboTV announced its intent to acquire Vigtory Inc., a sports betting and gaming company, and plans to release a sportsbook of its own by the end of 2021. The integration would give fuboTV subscribers a seamless way to view and bet on sports. FuboTV also has an agreement with FanDuel Inc. and acquired Balto LLC in December 2020.

On Aug. 25, Nexstar announced a multiyear agreement with SportsGrid LLC to launch SportsGrid Network, a diginet for sports wagering and fantasy sports. While the network is not OTT, the diginets are easily transferable to the OTT TV streaming services in our analysis.

Sinclair launched a sports betting app with Bally's Corp. in April. The Bally Sports App leverages the former regional Fox Sports Networks Sinclair purchased in 2019. The company is also developing a direct-to-consumer streaming product, which is expected to debut in 2022, providing unauthenticated users access to some content from Bally's regional sports networks, as well as other sports programs.

While some TV station owners have embraced live station streaming by third-party providers, some are planning on developing their own linear streaming services, such as Sinclair's Stirr and Fox's Tubi TV. Broadcasters are looking to the future and preparing for an industry that is likely to see retransmission fee growth eventually declining.

For more on our broadcast TV and to access the data from our TV station streaming database please click here.