Spanish Operators Offer The Largest Variety Of Bundles In Europe


Spanish Operators Offer The Largest Variety Of Bundles In Europe

The affordability of bundles in Spain ranges between 1.0% and 6.6% of gross national income per capita at purchasing power parity — the biggest range among the European countries.

The overall trend for service providers has been to reduce the number of bundles for simplicity and to introduce a level of customization for flexibility — for example, Vodafone's model.

Kagan's analysis examined 287 bundles offered by 40 of the largest operators in Western Europe. 63 of those were offered by Spanish operators and 28 of those were offered by Telefonica (Movistar+). The overall trend for service providers has been to reduce the number of bundles for simplicity and to introduce a level of customization for flexibility — for example, Vodafone's model. Few operators, such as Vodafone Group PLC, Orange SA, Telefonica and Deutsche Telekom, continue to offer a large variety of bundle options, as the operation of multiple networks — cable, ADSL, VDSL, fiber, digital terrestrial and satellite — usually mean a greater number of possible bundles. Many bundles in Spain contain more than one sim card. 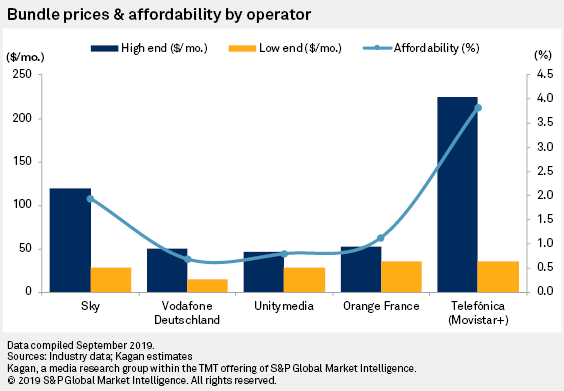 Telefónica (Movistar+), Orange Espagne SAU and Vodafone España SAU offer double-play, triple-play and quad-play bundles. The affordability ranges between 1.0% and 6.6% of gross national income per capita at purchasing power parity — the biggest range among the European countries. Subscribers in Spain have a great deal of choice over broadband speeds, pay TV packages, number of SIM cards and mobile data plans.

Fixed-mobile convergence strategies have accelerated over the last decade within the existing subscriber base for all of the large operating groups, while traditionally mobile-only operators such as Vodafone, which have struggled to build their fixed bases organically, have branched out in the acquisition of existing fixed assets. Vodafone is a prime protagonist, having acquired Liberty Global PLC's cable units in Germany, Hungary, Romania and the Czech Republic for €18.4 billion in July. It became Europe's leading quad-play operator and is expected to have 116.3 million mobile, 24.2 million broadband and 22.1 million pay TV subscribers by the end of 2019. In August, Vodafone made the first integration move in Germany by offering Unitymedia's prospective clients up to €15.00 per month off for mobile contracts, as well as extra mobile data.

Spanish Operators Offer The Largest Variety Of Bundles In Europe