Snap Inc.’s initial public offering is one of the higher profile IPOs in 2017. But what is Snap’s credit quality and where might it be headed in the future?

Mar. 22 2017 — Snap Inc.’s (NYSE: SNAP) initial public offering is so far one of the higher profile IPOs in 2017. Much of the attention is focused on the equity valuation of the company and its potential growth over the coming years, as well as what it means for future technology IPOs. However, in this blog, we will focus on an alternative perspective: what is the credit quality of this company, and where might it be headed in the future?

While Snap does not have publicly available debt, anyone with a stake in the firm who believes in Snap’s growth potential must also consider the downside risk that credit analysis provides. Certainly, those providing Snapchat’s parent1 with a $1.2bn revolving credit facility would have an interest in the company’s ability to pay back that amount if it were drawn down.

We compared Snap to several other high profile tech IPOs in recent years to see how they compared and if there were any potential implications for the firms. Specifically, we compared Snap to Yelp, Twitter, and Facebook during the period of their IPOs and in subsequent quarters.

Watch Jim’s 2 minute rundown on this topic in our Risk Insight Video. 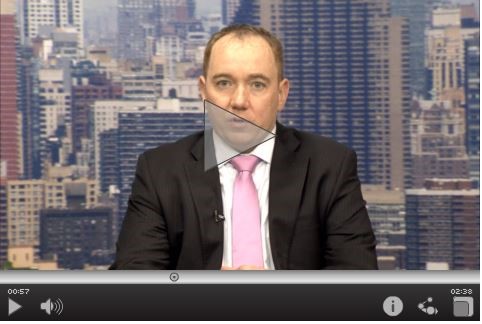 We undertake this analysis by utilizing our credit scoring model, CreditModel, an advanced statistical model by S&P Global Market Intelligence, designed to generate a quantitative credit score that approximates a credit rating by S&P Global Ratings.2 When scoring Snap, we calculate that the firm has an implied credit score of ‘b’.3

Snap’s credit score denotes elevated credit risk; more specifically, it would equate to a 4.45% observed default rate over a one year period, or nearly a one in 20 occurrence of default. To put that into perspective, Snap’s credit score is more risky than the median level of risk in the Application Software industry, which is ‘b+.’ As a result of the analysis, we see Snap’s credit peers are Yelp and Twitter, as each of these firms had similar credit quality pre-IPO.  Once public, the cash infusion from the IPO provided a short term credit boost, increasing their credit scores immediately, and then ongoing improvements in financial performance continued this increase in subsequent quarters. For example, for Twitter, this occurred as assets rose from $1bn to $3.4bn after the IPO, and the contribution to overall risk for this risk factor dropped from 33% to 17% as the credit score improved. If Snap were to follow a similar pattern, their credit health could improve over the coming quarters and buoy their longer term prospects from a financial health point of view. 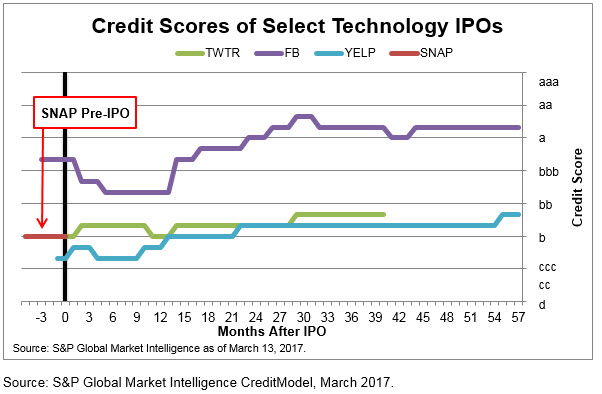 Facebook, by contrast, due to its relative size, profitability and cash reserves, held a credit score of ‘bbb+’ pre-IPO, an investment grade equivalent score. Their risk, by contrast did increase post-IPO, with the implied credit score dropping to ‘bbb-‘ in the next quarter, then down to ‘bb+’ before increasing back to ‘bbb+’ after a year. This drop in credit scores occurred alongside a broader shift in risk in the industry, where the median credit risk fell from ‘b+’ to ‘b’. Facebook’s score continued to rise in subsequent years, as high a ‘aa-‘ and most recently ‘a+’, solidly within the investment grade range.

How can Snap improve its credit quality?

If Snap were to look to the debt markets for funding in the future, an improvement in credit quality from ‘b’ would be advantageous to them. Twitter followed up on their IPO by issuing two corporate convertible notes totaling nearly $1.9bn in 2014, which were subsequently exchanged in 2015. This debt is rated ‘BB-‘ by S&P Global Ratings, the same as Twitter’s issuer credit rating and their CreditModel score, ‘bb-’.#learnMoreAbout("credit-analysis")How else can Snap improve on its credit quality? The majority of their calculated risk is driven by two main factors: a Return on Capital of negative 45.02% contributes 48% of the risk, and total assets of $1,722.7mm contributes 27%. Improved profitability, and, more specifically positive EBIT, as well as a greater asset base, would help drive an improvement in credit quality. These improvements would make the company’s financial condition more amenable to credit investors and more secure overall.

*Certain required inputs for our scoring model are not reported by Yelp.  To model their credit risk, we have leveraged our imputation logic to approximate what the appropriate required financial ratios would be, and then calculated a credit score.

1 Snap Inc. is the parent company of Snapchat.