Prime-Time Movies Rise In 2019 With More Spent On Budgets


Prime-Time Movies Rise In 2019 With More Spent On Budgets

With the coronavirus affecting production schedules for the foreseeable future, 2020 is expected to feature a growing number of theatrical presentations to fill out prime-time programming lineups. Following the merger of Viacom Inc. and CBS Corp., the use of the Paramount Pictures library will help the CBS broadcast network jump out to an early lead in the category after several years sitting on the sidelines.

CBS did not show any theatricals in 2019 for the third year in a row, but that streak is about to end. On April 7, the Eye Network announced that it was bringing back an old tradition, as it will air a movie in prime time every Sunday in May. The Sunday Night at the Movies lineup will showcase the powerful library of films from its newly reunited corporate sibling Paramount Pictures including "Titanic," "Forrest Gump," "Mission: Impossible" and two films from the Indiana Jones franchise.

The move is in response to production shutdowns from COVID-19 as new programming is expected to be scarce if the closure endures. But it also highlights the valuable addition of having Paramount back under the same umbrella as CBS.

In 2006, the year National Amusements Inc. split up CBS and Viacom, the broadcast network aired 17 theatricals in prime time. The following year, that number plummeted to five and never rose out of the single digits. The five Paramount films being aired in May will be the most for CBS since it aired eight in all of 2008. 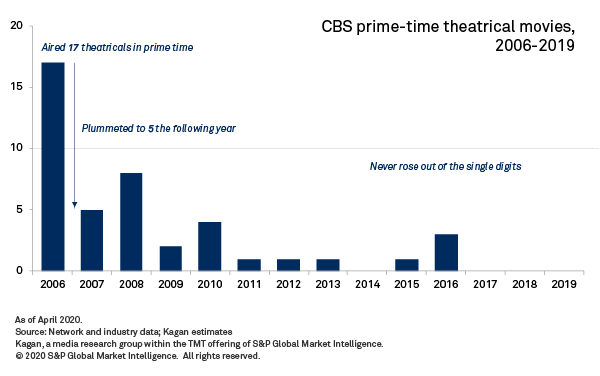 This ability to pivot quickly in a tempestuous programming environment illustrates an unexpected benefit to the recombination of ViacomCBS Inc. Initial expectations were that having Paramount back in the fold would have the most value in helping to populate a new streaming service, but the studio is already showing its worth on the linear side. And ViacomCBS' recently completed acquisition of a 49% stake in Miramax only provides further options to fill out the programming schedule amid a dearth of new content.

CBS' broadcast peers showed a slight uptick in theatricals aired in 2019, rising to 19 from 17 in 2018. NBC led the Big Four with 11 theatricals aired while ABC showed seven, as these two networks showed the strength of having sister studios in their corporate family.

And while FOX has not relied on theatricals recently, reaching double digits just once in the last decade and only airing one movie each of the last three years, the network will have even less programming flexibility in this space as its parent company, Fox Corp., sold 20th Century Studios to Disney in 2019.

Click here to access a spreadsheet containing data on the number of movies shown in prime time on broadcast networks from 1999 to 2019 (for clients only).

Paramount Pictures one of crown jewels in CBS acquisition of Viacom