The precision agriculture market is showing strong growth in the face of serious challenges. Driven by technology that aids machines in planting and harvesting crops, large farms are currently driving overall revenue. Technology has, however, already penetrated the large farm segment to a significant degree, limiting revenue growth to slightly below the overall precision agriculture growth rate.

Technology in the other two precision agriculture categories, small farms and livestock monitoring, though smaller in revenue terms, is driving growth at a faster rate than large farms. And, as there are many more small farms than those that are large worldwide, there is more room for growth in these two segments. Yet that development will be challenged by the difficulty in convincing small farmers to invest in technology. In most countries, smaller farmers operate with very low margins, leaving little additional capital to invest. Those selling technology to them must overcome small farmers’ understandable reluctance by convincing them of the return on investment that technology brings. 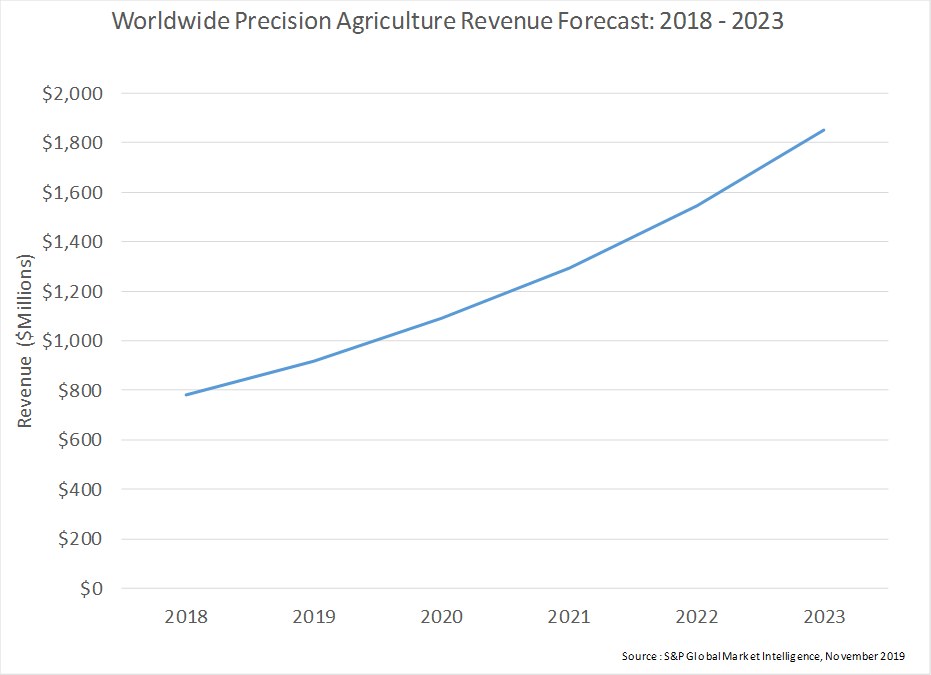 Kagan’s definition of precision agriculture includes electronics, devices, software, and services that collect data and help transmit it to the cloud. Large farms are more than 500 acres and depend on mechanized agriculture, including sensors, electronics and the internet of things, or IoT, help to more accurately plant, fertilize and harvest crops. Small farms are not as heavily mechanized in planting and harvesting, but depend on technology used in soil and crop monitoring to guarantee successful harvests. Livestock monitoring refers to technology used to monitor the location and health of large farm animals.

In terms of revenue, the precision agriculture market is dominated by large farms, which are the domain of agricultural machinery. Technology on tractors and combines is pervasive, including several types of sensors, GPS devices, radios, displays and supporting silicon such as memory, microcontrollers and microprocessors. While the adoption of technology is increasing, growth is somewhat limited. Some of the major regions for large agriculture, such as North America and Australia, are also advanced economies in which sophisticated agricultural machines are commonplace and quantities are not growing rapidly. So in these markets, growth is more dependent on the replacement cycles of these machines. Future growth of agricultural technology may need to come from other areas with large amounts of arable land such as Russia and China.

Among small farms, precision agriculture is more limited, but growing. Worldwide, the number of small farms vastly exceeds the number of large farms, creating a much larger total available market. The penetration rate of technology is also significantly lower, so the potential for growth is great. The most significant limitation is the ability of the small farmers to purchase technology, particularly in the developing world. Significant drops in technology ASPs will be needed before adoption accelerates beyond North America and Western Europe.

Livestock monitoring is another area that should see significant growth over the next several years. The penetration of technology is relatively low, and primarily happening in Europe and North America. For this market to grow significantly in the future, monitoring of other animals beyond cattle, including sheep and pigs would help drive growth, especially in Asia.