Taking Advantage of Issuance Trends in 2020

Jul. 24 2018 — After so many years of living and working in London, two years ago I applied for, and was finally granted, British citizenship. Imagine my surprise when, a few weeks later, the UK European Union referendum took place and the majority of voters opted for Brexit!

As a dual national, both European and British, I feel twice the pain of an uncertain future and sometimes I wish I had a crystal ball.

While it is hard to predict how the whole separation process will pan out, S&P Global Market Intelligence offers a new statistical model that allows users to understand how firms’ credit risk on either side of the ocean may change under multiple exit scenarios. The Credit Analytics Macro-scenario model covers the United States, Canada and European Union countries plus the United Kingdom (EU27+1). In addition, the model can be run via the S&P Global Ratings’ Economists macro-economic multi-year forecasts, tailored for this specific model and updated on a quarterly basis.1 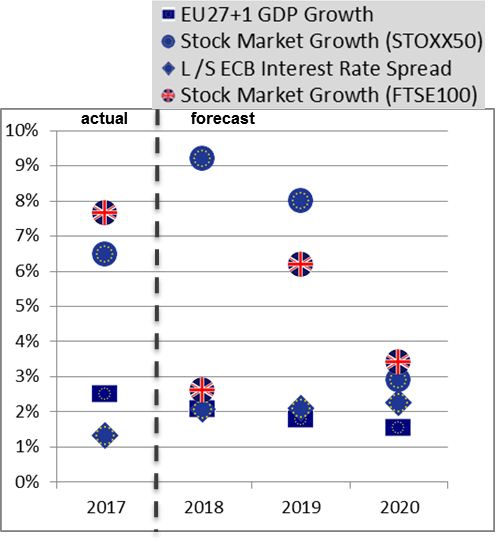 Source: S&P Global Market Intelligence (as of June 2018). For illustrative purposes only. L/S ECB Interest rate spread is the spread between long-term and short-term ECB interest rates. Y-Axis is % of; GDP Growth, Stoxx50 Growth, Interest Rate Spread or FTSE100 Growth, depending on the correlating symbol as described in the key.

The expectation is for economic growth to slow-down in the EU27+1. This will be accompanied by progressive monetary policy tightening and a volatile performance of the stock market index growth. This view is aligned with the baseline scenario included in the European Banking Authority (EBA) and the Bank of England (BoE) 2018 stress testing exercise that “[…] reflects the average of a range of possible outcomes from the UK’s trading relationship with the EU”.2

Figure 2 shows the evolution of the median credit score of Energy sector (left panel) and Utility sector (right panel) large-revenue companies in EU27+1, obtained by running the economists’ forecasts via the Macro-scenario model.3 The median score for 2017 is generated via S&P Global Market Intelligence’s CreditModelTM 2.6 Corporates, a statistical model that uses company financials and is trained on credit ratings from S&P Global Ratings.4 The model offers an automated solution to assess the credit risk of numerous counterparties, globally. The scores are mapped to a numerical scale where, for instance, bb- (left panel, left scale) is mapped to 13.0; a deterioration by 1 notch corresponds to an increase of one integer on the numerical scales.

Figure 2: Evolution of the median credit score of Energy and Utility sector companies in EU27+1, based on S&P Global Economists’ macro-economic forecasts run via the Macro-scenario model.

Source: S&P Global Market Intelligence (as of June 2018). For illustrative purposes only.

Starting from 2017, we see a higher level of credit risk in the UK (red line) than in EU27 (blue line); in subsequent years, the median credit risk increases on both sides of the Channel but the “risk fork” between the UK and EU27 tends to widen up at the expenses of the UK, for both sectors.5

Despite the fact that the median credit score may not change sizably between 2017 and 2020, remaining below half a notch overall in all cases, it is worth keeping in mind that the probability of default (PD) associated with a credit score changes in line with the economic cycle, and thus increases (decreases) during periods of contraction (expansion).

In our model, we account for this effect by first mapping the credit score output to a long-run average PD; next we scale it via a “Credit Cycle Adjustment” (CCA) that looks at the ratio between the previous year and the long-run average default rate historically experienced in S&P Global Ratings’ rated universe.6 If we adjust the long-run average PD via the CCA, we can easily identify potential build-up of default risk pockets in different countries within the EU27+1 as time evolves, as shown in the animations within Figure 3. Green refers to a lower PD than 2017, orange refers to a higher PD than 2017, and red refers to a PD breaching a pre-defined threshold (4.5% for Energy Sector and 0.3% for Utilities sector).7

Figure 3: Potential pockets of default risk in Energy and Utility sector companies in EU27+1, based on S&P Global Economists’ forecast.

With the Macro-scenario model, we aimed for a user friendly model, and took into account the strong economic ties within EU27+1, the existence of a common market and the circulation of a shared currency in the majority of the EU countries, in order to select a parsimonious yet statistically significant set of inputs (just imagine otherwise forecasting multiple macro-economic scenarios for 28 individual countries, over multiple years).8

Readers may wonder how the model differentiates the evolution of credit risk by country if it uses a limited set of aggregate macro-economic factors (e.g. EU28 GDP growth, etc.) across EU27+1. Nine separate sub-models were actually optimized, based on economic commonalities and historical evolution of the S&P Global Ratings transitions in those countries, to account for the existence of different EU “sub-regional” economies (for instance Nordic countries as opposed to Eastern European countries). For the UK, we went one step further, by explicitly including a market indicator, the FTSE100, as a precautionary measure given a potential “full decoupling” of EU27 and UK economies in the near future.

Well, so far so good, at least in the case of a “soft” Brexit! But what if we end up with a “hard” Brexit?

The EBA and the BoE 2018 stress testing exercise include a stressed scenario that “[…] encompasses a wide range of economic risks that could be associated with {hard} Brexit”.9 The scenario corresponds to a prolonged recessionary period, with negative GDP growth for several years and a generalized collapse of the stock markets, similar to what happened during the 2008 global recession. Unsurprisingly, the median credit score output by our macro-scenario model companies significantly deteriorates for both Energy and Utility sector. Figure 4 shows the build-up of potential default risk pockets and their evolution over time, under stressed economic conditions, depicting a bleak view over the length of time needed for a recovery of these sectors.10

Figure 4: Potential pockets of default risk in Energy and Utility sector companies in EU27+1, based on EBA’s and BoE’s 2018 stressed scenario.

I do not have yet a crystal ball to predict the future, e.g. whether petrol will cost more or less, or whether I will be paying higher utility bills in the UK as opposed to (the rest of) the European Union, but S&P Global Market Intelligence’s Macro-Scenario allows gauging potential credit risk changes in individual countries, under a soft or a hard Brexit scenario. More in general, the Macro-Scenario model offers a quick, scalable and automated way to assess credit risk transitions under multiple scenarios, thus equipping risk managers at financial and non-financial corporations with a tool that enables them to make decisions with conviction.

1 The macro-economic forecasts will become available on the S&P Capital IQ platform from 2018Q4. S&P Global Ratings does not contribute to or participate in the creation of credit scores generated by S&P Global Market Intelligence.

3 The results of this analysis depend on the portfolio composition. In addition, other industry sectors may react differently from the Energy and Utility sectors.

5 The 2017 median score for the Utility sector is better than the score for the Energy sector, due to the inherently higher risk of companies in the latter.

6 An optional market-view adjustment is available within the macro-scenario model. In our analysis, we did not include this adjustment, for the sake of simplicity.

8 This is also one of the reasons we found it unnecessary to include oil price for the modelling of credit risk of the energy sector in EU27+1, as we found the stock market growth was sufficient.

10 We adopt the same colour conventions as in Figure 3.