Global consumers forced to stay at home turned to video games to pass the time in the first quarter, pushing combined mobile and console gaming software and services revenue up 18.2% year over year to an estimated $32.92 billion. 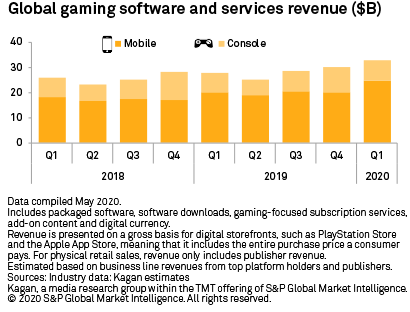 Mobile gaming grew faster than console gaming in the three months ended March 31 due to the largest mobile gaming market, China, adopting stay-at-home measures to combat COVID-19 starting in late January. Many of the top console-focused markets did not enter lockdowns until March.

The revenue boost in China primarily affected Apple's iOS App Store and our "other" segment, which largely reflects the third-party app stores owned by retailers and social network operators in China. Alphabet's Google Play is not available in China.

The bulk of console gaming's software growth came from Nintendo Co. Ltd., which released Animal Crossing: New Horizons not long after coronavirus lockdowns were implemented in many Western markets. Reviewers and social media channels raised the game's profile as a welcome respite from the stressors of a world wrestling with COVID-19.