Jan. 28 2016 — Hoarding billions of dollars in cash still seems to be a favored tactic by some of the biggest companies in America. But why? These billions are probably only earning around 2 percent interest by investing that money in United States Treasury bonds. Would it not be a better decision to invest in other products or services?

For the Agenda (A Financial Times service), as of December 11th 2015, we compiled a list of the biggest cash rich companies in the S&P 500 by screening for their ability to send revenue to the bottom line (net income margin), disposable-cash efficiency (unlevered free cash-flow margin) and ability to generate at least 10% returns when reinvesting capital in the company (return on investment capital). This gives us an indication of the cash rich companies that also are efficient at sending revenue to the bottom line. Here are the top 20. 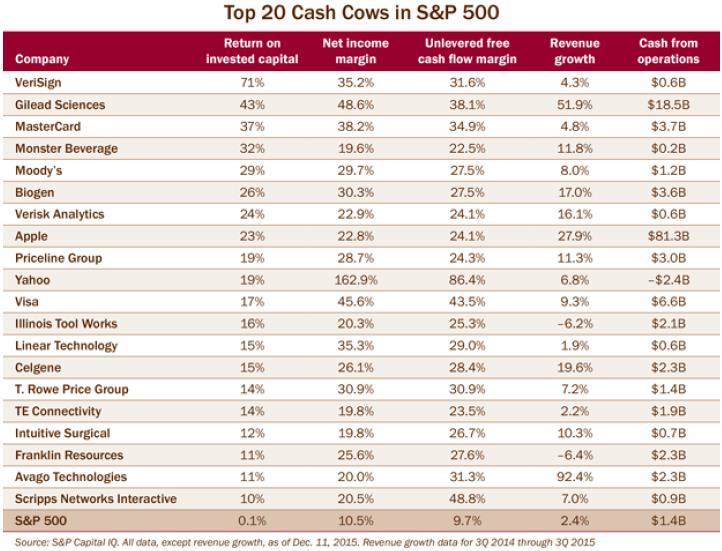 *Methodology: Identified companies with net income margins and unlevered Free Cash Flow margins in the top 20th percentile relative to all S&P 500 companies. Then we filtered down further by specifying that the companies have Return on Invested Capital greater than 10%. The Return on Invested Capital is in Descending order. The financial period used for each criterion is latest fiscal year. All data here in as of Dec 11th 2015.

Of course, if we simply looked at absolute ‘cash from operations’ then the list of 20 would be the larger (in terms of market cap) companies in the S&P 500 as they have more cash to hold. For example, with $81.3 billion in cash, Apple has the most cash out of the S&P 500 companies. This is so much money that theoretically they could buy Goldman Sachs, which has a (market capitalization of $68 billion as of 20 Jan 2016). Instead of just looking at cash rich companies with low cash usage and relatively high market share, we wanted to see which of these companies are well positioned for market growth.

Back to our original question. What are the reasons behind these stockpiles of cash? Well it could be a variety of reasons. The competition for new investments and acquisitions is very high and cash is one way of beating the other investors. This is because the bidding companies can pay a premium for the target company to beat competition.  It is reported that Google ($29 billion in cash from operations, nearly 3 times less than Apple but still a formidable cash pile as of Jan 20th 2016) makes a new acquisitions roughly every week (from S&P Capital IQ Key Developments). Another theory is that there could be tax implications as to why these companies hold cash. Yet another possibility is that these companies could be saving for an economic downturn.   For example, are companies using excess cash to manage the deflationary pressures in China, which could have a contagion affect across multiple global markets? The last time the world experienced deflation was in the 1930’s. So cash reserves tend to be worth more during this time. Perhaps the cash is therefore a buffer?

However, in a world that is technologically advancing at such a rapid pace, perhaps the cash that companies are accruing is a sign of their optimism that the world is coming into a transformative phase, that there will be something seismic to invest in such as a market disrupter of great proportions.

To read the full article from Agenda, please click here.