Nov. 14 2018 — Stripe Inc.'s $245 million capital raise was the clear highlight of U.S. financial technology fundraising in the month of September, weighing in at more than four times the next-highest raise. Stripe's massive round even stood out in comparison to other sectors, ranking in the top 15 of all U.S. private placements during the month. 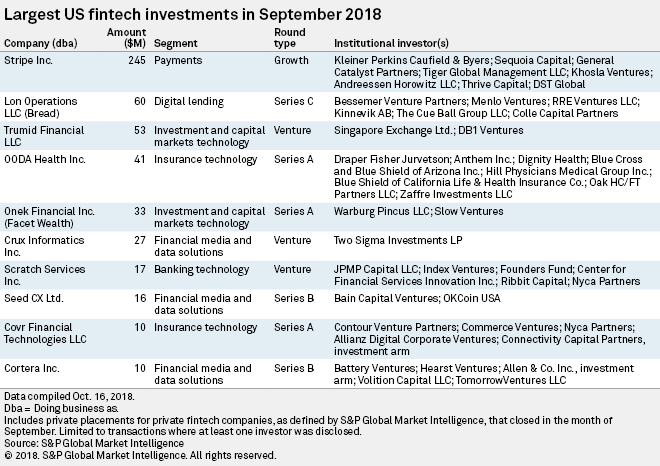 The latest raise values Stripe, a payments company founded in 2009, at $20.25 billion on a post-money basis. The most recent valuation is a massive increase from November 2016, when a $150 million infusion valued the company at $9.15 billion. But on a percentage basis, an even bigger jump in valuation came from May 2012, when the company was valued at about $100 million, to January 2014, when its valuation skyrocketed to $1.75 billion.

The Stripe tale is a classic tech story. With only seven lines of code, two brothers in their early twenties launched the company that now counts industry giants such as Amazon.com Inc., Alphabet Inc., Facebook Inc. and Microsoft Corp. as clients. Patrick and John Collison believed that PayPal Holdings Inc., one of the leading payments companies, was designed specifically for peer-to-peer transactions, rather than e-commerce, and that it was not built for scale, as they explained in a May episode of How I Built This. In response, they built a system that allows e-commerce companies to easily add payment functionality to their websites. For instance, an e-commerce company can add a button to its page that collects the customer's credit card information and sends it to Stripe for processing.

Stripe was also unique in that it appealed to software developers. As a result, it could attract tech startups as customers that, while small at the time, would grow to become sizable institutions. This reputation in the developer community even led to companies approaching Stripe about creating new systems. For instance, ride-hailing company Lyft Inc., a loyal customer, specifically asked Stripe to help create an instant cash-out service for its drivers, according to a Recode article published in September 2016.

Due to Stripe's large capital raise in September, the payments category ranked highest in terms of aggregate deal value among the six fintech categories that S&P Global Market Intelligence tracks. But based on number of transactions, financial media and data solutions was the leader. 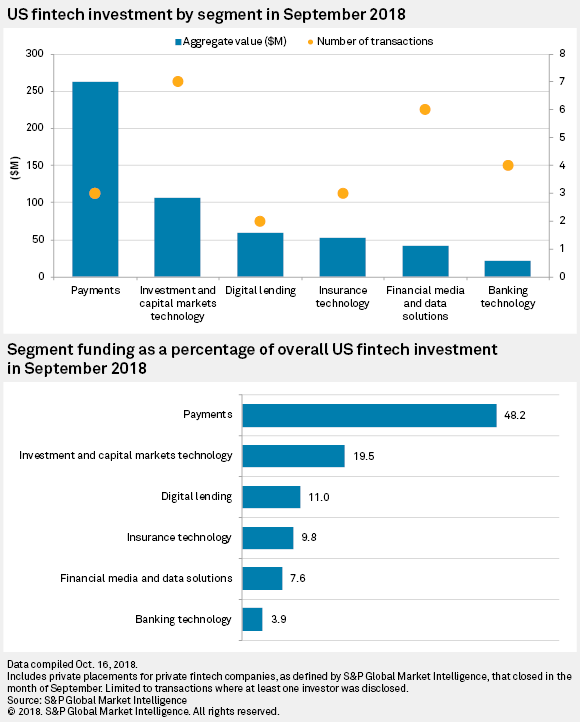 The financial media and data category includes companies such as Crux Informatics Inc., which helps institutions store and process data. San Francisco-based Crux, which was founded in 2017, has some big-name backers from the financial services world: Citigroup Inc., Goldman Sachs Group Inc. and, more recently, Two Sigma Investments LP. Of the three, Two Sigma would seem the most likely user, as a quantitative asset manager that, according to its website, crunches more than 35 petabytes of data. But Wall Street investment banks seem increasingly focused on tech as well. A recent article in the Financial Times, for instance, said that a fresh crop of analysts in JPMorgan Chase & Co.'s asset management division were required to complete coding lessons.

No particular investor appeared to make an inordinately large amount of fintech investments during the month, but there were several institutions that made two investments. 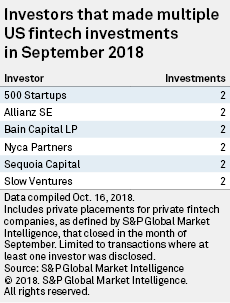 Stripe lined up a large number of investors — eight in total — which is not surprising given the size of the transaction. Meanwhile, OODA Health Inc. also managed to assemble a roster of eight investors for an offering that was about one-sixth the size of Stripe's. Founded in 2017, OODA Health aims to simplify and automate payments in the healthcare industry, using technology to help payers and providers collaborate on a better system. The investor list on its September capital raise demonstrates this effort to bring together both sides, with participation from health insurers and hospital systems alike.