Disney+ Debuts With a Bang


Disney+ Debuts With a Bang

The Walt Disney Co.'s first serious foray into the subscription video arena shot out of the gates, with Disney+ amassing nearly 30 million paid subscribers in less than six months of operation. An attractive price point and a deep content library at launch helped Disney+ soar, while a distribution deal with Verizon Communications Inc. that gave select Verizon Wireless unlimited customers a free year of the new service also boosted uptake.

Disney's decision to offer a discounted bundle for a Disney+, ESPN+ and Hulu LLC package likely accelerated sub gains for all three services in the fourth quarter of 2019, although average revenue per paid sub declined on an annual basis for both Hulu and ESPN+ as a result.

The splashy debut of Disney+ on Nov. 12, 2019, saw it race past 10 million subs within days of launching, with the service reaching 28.6 million paid global subscribers as of February. That steep trajectory is in stark contrast to Hulu and Netflix Inc.'s path to eclipsing 25 million paid subs: It took Hulu roughly nine years to reach that same mark and Netflix approximately five years. Disney+, however, launched in a much more evolved subscription video-on-demand marketplace with a treasure trove of existing content and intellectual property at its disposal. 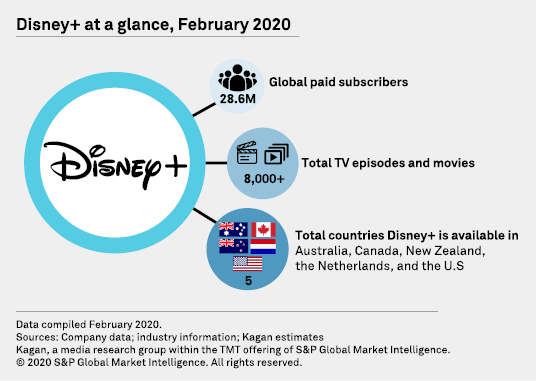 Disney+'s $6.99/month price point places it well below SVOD offerings from such rivals as Amazon.com Inc., HBO and Netflix, with additional savings available to Disney+ subs who sign up for the $69.99 annual plan, which reduces the monthly cost to $5.83. The bundle of Disney+, ESPN+ and Hulu at $12.99/month also offers a significant discount to the standard pricing for each service and is on par with the standard Netflix SVOD plan — and priced well below HBO NOW and Netflix's Premium offering. Disney's aggressive pricing strategy for its SVOD offerings may turbocharge sub growth in the short run but could also contribute to operating losses for quite some time. 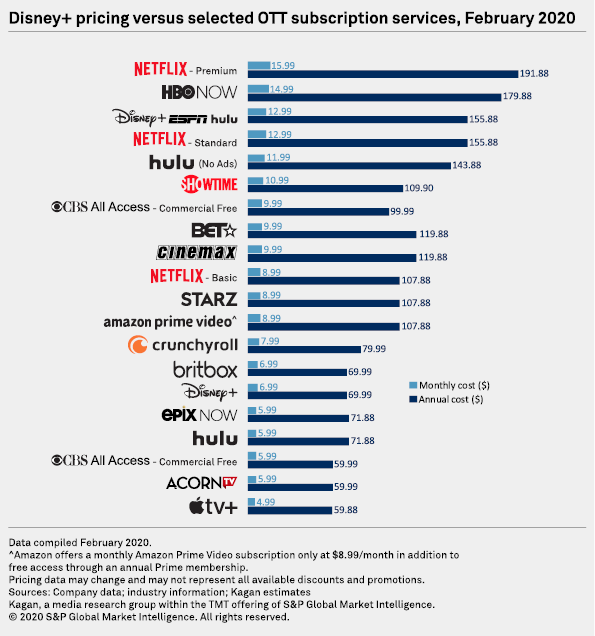 The Disney+ content library includes more than 500 films and over 7,500 TV episodes, with plans to roll out 25 new episodic series that would debut during the first year of the service. Much of Disney's film library stretching back over 80 years is available at Disney+ alongside programming from brands and franchises including Marvel, Pixar and Star Wars and selected National Geographic movies and series. Based on information presented at its investor day presentation in April 2019, Disney plans to expand its Disney+ library to over 600 movies and 10,000 TV episodes by year five.

Disney's next planned expansion of the service is slated for March, when Disney+ will go live in Austria, France, Germany, India, Ireland, Italy, Spain, Switzerland and the U.K., with additional Western European and Nordic countries slated to be added later in 2020. A rollout of Disney+ in Eastern Europe and Latin America is scheduled for the first half of 2021, while Asia-Pacific country launches could come throughout 2020 and 2021.

Disney+ is available across most major platforms and devices, with support for viewing on computers, phones and tablets, gaming consoles and TVs. 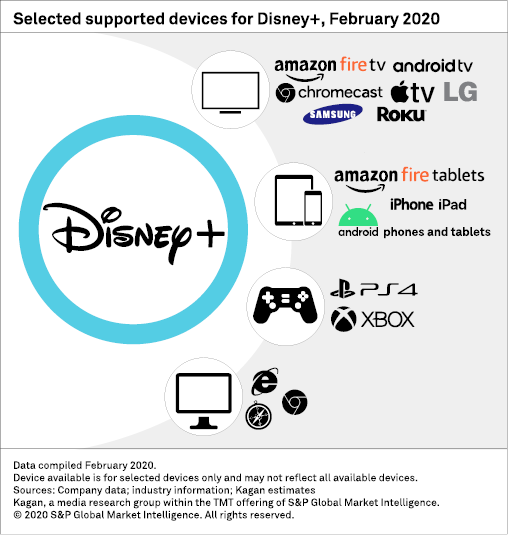