The emerging cloud gaming market is seeing an influx of interest as consumers are forced to pass the time indoors to slow the spread of coronavirus.

NVIDIA Corp.'s GeForce NOW and Shadow by Blade have told their subscribers that their networks are being tested by increased users and usage, particularly since many U.S. schools have closed their doors. Both services appear to be weathering the load for existing subscribers, but have had to limit new subscribers to maintain a usable experience.

Kagan expects revenue-driving cloud gaming users to more than triple in 2020 to 9.6 million. While our projection originally imagined Google Stadia rolling out its free tier early in the year, users looking for something to play while stuck at home are filling that gap. Google's free tier is still slated to launch some time in 2020. 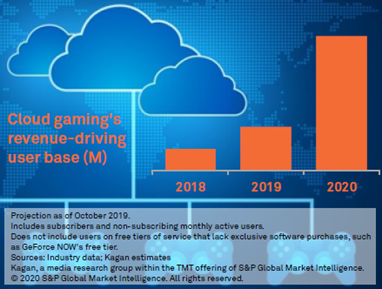