Although ad revenue for some broadcasters firmed up sequentially in fourth quarter 2019, aided by early political and an uptick in service categories like financial and legal, COVID-19 fears have placed a question mark on major ad revenue events and the related positive outlook on overall ad revenue environment. 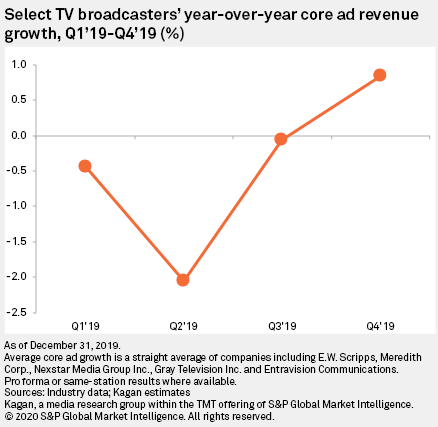 Several TV and radio station group executives in fourth-quarter 2019 earnings calls and investor conferences alluded to a healthy ad revenue landscape, with some expecting record political spending during the latter half of 2020, preceded by the now-postponed Olympics in Tokyo. The majority of these earnings calls took place in February and early March, however. The situation has since changed drastically all across the U.S. and the world due to the COVID-19 pandemic.

With the Olympics now postponed for a least a year, prospective advertisers are left with fewer places to spend their ad budgets. On the political front, the Democratic Party Primaries have been postponed in Georgia, Kentucky, Louisiana, Maryland and Ohio.

However, some executives remained hopeful the social distancing initiatives resulting from the pandemic will not affect the broadcast industry much as more people stay home and consume more TV programming.

Nexstar Media Group Inc. Chairman, President and CEO Perry Sook in a conference presentation on March 10 said the company has not seen any ad campaign cancellations nor seen any adverse or favorable rating movements. Sook added that news programming, which is a topmost ad revenue source for the company, is expected to attract more viewership as more people stay home.

Over at Townsquare Media Inc., company executives in Townsquare's fourth-quarter 2019 earnings call said growing COVID-19 pandemic fears have affected the company's live events segment adversely, with the cancellation of live events in March and a significant number of second-quarter events expected to be canceled.

However, the impact on the company's advertising segment has so far been limited, even though some prospective advertisers canceled or paused their ad campaigns for the month of March. CFO Stuart Rosenstein said that the company's business cancellation insurance excludes coverage related to health pandemics.

Some TV station groups’ execs had been quite optimistic about the expected political ad bonanza before the crisis intensified with Sinclair Broadcast Group Inc. expecting to finish 2020 with the company's highest political revenue on record. Nexstar earlier said it expects a high single-digit growth in political over what the company logged in 2018. Gray Television Inc. raised its 2020 political ad revenue guide to between $250 million and $275 million.

Some radio station owners were also optimistic about expected political ad dollars in 2020; although, much of it gets spilled over from the TV broadcast sector. Cumulus Media Inc.’s same-station revenue is pacing down low single digits for first quarter 2020, offset by a 100 basis point tailwind from political.