Coronavirus Impact On TBS As Sporting Events Drop Like Flies


Coronavirus Impact On TBS As Sporting Events Drop Like Flies

Sporting events have been dropping like flies which will cause a huge ripple effect of lost ticket sales, travel expenses and ad sales. The Turner Network Television Inc.'s programming schedule took a gut-punch last week when it was announced the NCAA March Madness tournament was being canceled in addition to the suspension of the NBA.

It is unclear how the Turner Networks will replace the missing games. NBA games will be lost at TNT as will the Final Four and national championship games across multiple Turner networks. ESPN will also be impacted by the loss of basketball.

We estimate that margins at TBS will contract by 30% this year, with cash flow dipping below the $1.00 billion mark for the first time since 2015.

TBS has actually fared better than some other cable networks in the ad revenue category, peaking at $1.23 billion in 2015 and landing at $986.9 million last year. However, going forward, it is difficult to predict with not only sporting events being canceled but a number of TV and film projects put on hold as well. 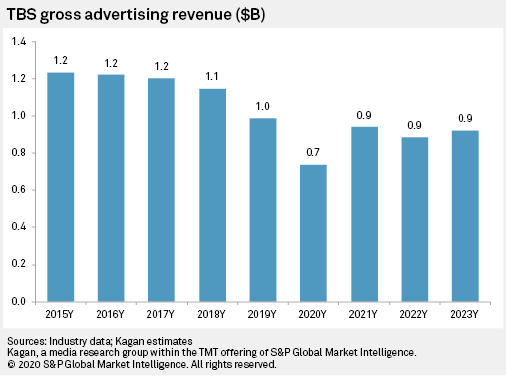 The NCAA Men's Basketball Tournament was set to begin March 17. It was scheduled to culminate with the 2020 Final Four on April 4 and the National Championship game on April 6 in Atlanta. The two semifinal games and the national championship were slated to air across TBS, TNT and truTV (US), with the latter two networks providing "TeamCast" presentations featuring commentators with ties to that specific university.

The NBA regular season, which typically starts in late October and runs through the middle of April, was close to 80% completion before the league suspended play for at least 30 days. NBA Commissioner Adam Silver said in a statement to the press that after the 30-day period the league will reassess the situation. While on TNT, Silver said if at all possible, the league would try to play out most of the regular season once play is able to resume.