Despite the poor propagation of 5G's earmarked spectrum (3.5 GHz and millimeter), nearly every one of the 56 global mobile network execs Kagan surveyed last month has plans to deploy 5G into rural areas. However, the timelines differed.

While 55% of the execs expect to cover rural areas with 5G this year or next, 43% of the surveyed group expected to provide rural 5G in 2021 or later, according to our first-ever carrier executive 5G survey. We emphasize the "or later," given the challenges rural broadband has posed to carriers historically.. 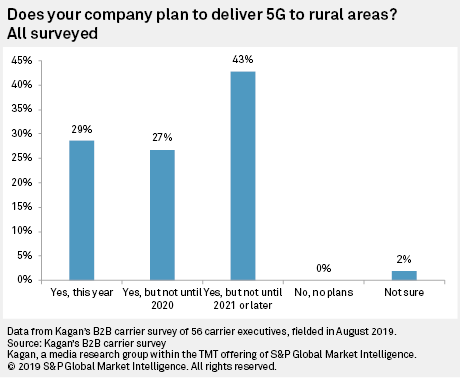 5G will eventually run on lower-band spectrum as existing frequencies get re-farmed. But that can take years. AT&T Inc. did not sunset its 2G network until 2017, well after the 2G roll out of the 1990s. So we also asked carrier execs which spectrum range they would "initially" use for 5G roll outs and just 13% stated spectrum below 2.1 GHz, where the majority of today's wireless services operate.

North American carrier executives surveyed were the most engaged with millimeter versus other regions at 83%, while executives in the Middle East/Africa had no plans at all to initially roll 5G out below the 3.5 GHz range.

But the nature of poorly propagating higher-band spectrum north of 2.1 GHz is not an ideal fit for rural broadband where low population and wide-open spaces make the economics difficult.

Despite the challenges, it is a rule for the Sprint Corp./T-Mobile US Inc. merger that the combined company covers 85% of rural America with mobile 5G in three years.

But the existence of the rural-focused U.S. Wireless ISP market, or WISP, indicates the Tier 1 operators have so far been more talk than walk when it comes to covering areas where return on investment formulas fail. As we have examined, these countryside ISPs can hit cash flow break with subs in the five digits despite all the challenges innate to rural broadband. The WISP space now counts over 4 million subs in the U.S., up from 2.6 million in 2014.

The mixed results for carriers providing U.S. rural broadband access over the years are reflected in the survey results. The six telecom execs surveyed in North America were split evenly regarding rural broadband timelines with one-third expected to roll out rural 5G this year, one-third expecting it in 2020 and the rest hedging their bets by answering 2021 or later.

We also asked carrier execs their plans for fixed 5G wireless access, which generally requires in-home radio hardware that is not movable, similar to WISPs.

Of all 56 execs, 48% said they were rolling fixed 5G out in 2019, with nearly all surveyed expected to roll out fixed 5G at some point. The 2021 and later crowd shrinks significantly for this question to just 14% compared to 43% for rural 5G, underscoring how fixed wireless plays well in both rural and urban environments.

Kagan’s global B2B survey of wireless providers on their 5G deployment and service development strategies populated more than 2,000 data points and yielded insights on deployment roadmaps, technology approaches, pricing strategies, killer apps, and plans for rural deployments. The data is available in our "survey banner" file that presents the results of 24 key questions asked of executives and decision makers at 56 discreet wireless carriers in all major geographic regions.