Total distribution revenues reported by the cable network owners we tracked rose by 4.8% year over year to $11.03 billion for the first three months of the year.

Against the backdrop of a pandemic that subsequently caused an economic downturn, most U.S. cable programmers had to rely on affiliate fees to sustain revenue growth during the first quarter. Total distribution revenues reported by the cable network owners we tracked rose by 4.8% year over year to $11.03 billion for the first three months of the year. 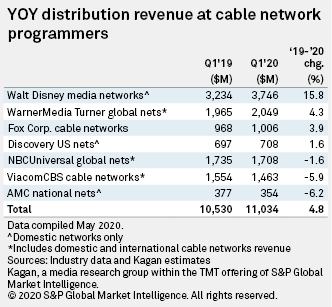 Cable networks primarily felt COVID-19's disruption on their advertising revenue streams during the first quarter. However, most programmers acknowledged that their distribution revenues were not insulated from the negative effects of the global pandemic. While company executives were cautious about providing future guidance on financial performance during their respective earnings calls, they shared expectations of potentially significant subscriber churn driven by economic pressures on pay TV households over the next quarters. The recent spike in unemployment in the U.S. has placed affiliate fees collected by cable networks at risk as consumers might opt to forgo expensive traditional multichannel video programming distributor subscriptions to reduce spending.

Except for Discovery Inc., the major cable network owners still derived a majority share of their total revenues from the affiliate side of the business during the quarter. 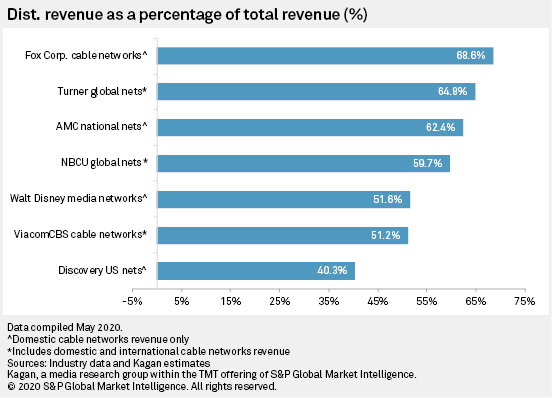 While company execs continued to acknowledge the importance of preserving relationships with traditional pay TV distributors during their earnings calls, the primary focus for most major legacy media companies seemed to have shifted heavily on seizing growth opportunities from their direct-to-consumer streaming services, especially as COVID-19 continues to disrupt the revenue streams of the cable network industry.