As virtual multichannel services continue to adjust channel lineups and price points to create an optimal bundle, cable networks dedicated to kids have become staples on most of their base packages.

Our analysis of select bundles from virtual multichannel services shows costlier options like AT&T Inc. AT&T TV NOW's PLUS and MAX and Sony Corp. Play Station VUE's Elite and Ultra packages have the widest selection of kids channels, with each base package offering nine kids networks in their lineups. The base packages with the most kids networks are priced in the range of $50-$85 per month. 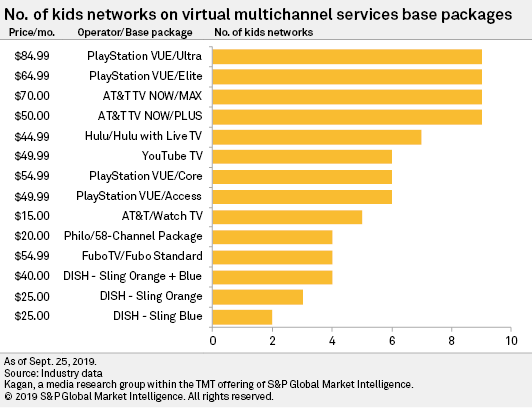 Cheaper packages like AT&T's Watch TV and Philo, priced at $15 and $20 per month, respectively, offer a limited selection of channels for kids. Networks dedicated to children are also less abundant on the base packages of DISH Network Corp.'s Sling TV and FuboTV, although the two services have made most of the kids networks available as part of buy-through or add-on packages.

Meanwhile, the most widely distributed networks for children across the eight major virtual multichannel services were WarnerMedia's Cartoon Network / Adult Swim and The Walt Disney Co.'s Disney Channel and Freeform. Of the 14 base packages we looked at for this analysis, Cartoon Network was included in 13 packages, while Disney Channel and Freeform were both included in 10 packages.

Kids networks owned by Viacom Inc. were not as widely distributed compared to the Disney-branded and Warner Media-owned channels. Virtual multichannel services like Hulu LLC's Hulu with Live TV, Play Station VUE and Alphabet Inc.'s YouTube TV do not carry any of the Nickelodeon-branded networks, which includes the main Nickelodeon/Nick At Nite channel, Nick Jr., Nicktoons and TeenNick. Nick Jr. is available in more base and add-on virtual bundles compared to the flagship Nickelodeon network.

Programming geared toward children has been gaining more traction outside of the traditional multichannel platforms. Kids content has been identified by ViacomCBS as one of the key drivers that will accelerate the combined company's direct-to-consumer strategy. Kids content has also emerged as a key offering for major subscription video-on-demand services like Netflix Inc., Amazon.com Inc. and Hulu, as outlined in our analysis of OTT services for kids.

With increased competition on other platforms, linear channels dedicated to kids have succumbed to the ratings and traditional subscriber erosion trends affecting the cable network industry.

The proliferation of on-demand viewing of kids programs over digital services has squeezed out ratings on kids channels. Data from Nielsen Media Research Inc. indicates average viewership for kids networks has been following a declining trend every month since the start of the year. In August, the 24-hour audience delivery for the 13 Nielsen-rated kids networks included in our analysis declined by 18.8% year over year to an average of 167,000 households, the lowest August delivery since 2015, and corresponds to a five-year CAGR of negative 18.0%.

As cord cutting and cord shaving continue to be prevalent problems for the cable network industry, the availability of kids networks on virtual multichannel services can help alleviate some of the subscriber declines and give the networks more exposure outside of traditional platforms. 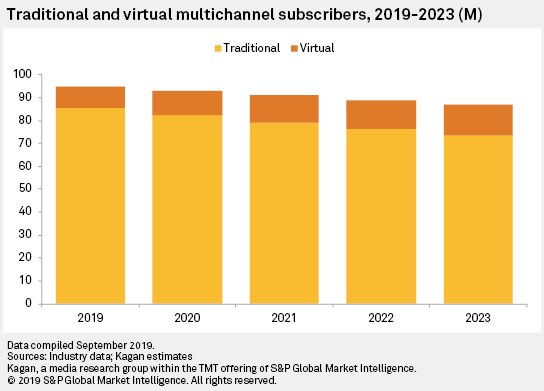