Much has been made of the deal struck between AMC Entertainment Holdings Inc. and NBCUniversal Media LLC's Universal Pictures that allows the studio to debut their films on premium video-on-demand within three weeks of their theatrical release. As part of the deal, AMC will receive a portion of the revenue from the premium video-on-demand, or PVOD, sales. Previously, exhibitors were holding fast to their exclusive 90-day window, but the COVID-19 pandemic has altered the landscape and given the studios some power to negotiate new terms.

The world's largest exhibitor agreeing to a shorter window with a major studio is certainly eye-opening, but it may not completely upend the decades-old release model as many are speculating. We analyzed the box office data for the 137 wide-release films released in 2019 and calculated the percentage of total box office through the first three weeks in release relative to its total domestic box office gross. The films took in 75.6% of their total box office in the first three weeks and the remaining 24.4% came over the remaining weeks. The 137 films averaged 11.4 weeks in theaters. 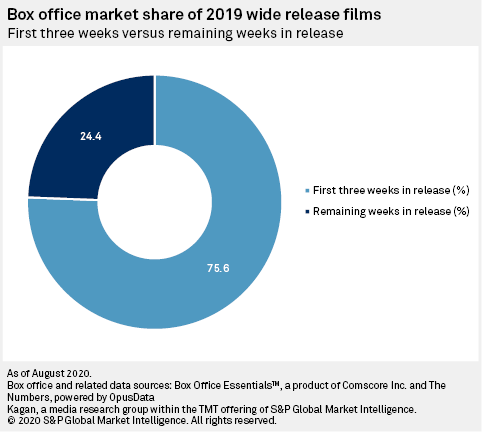 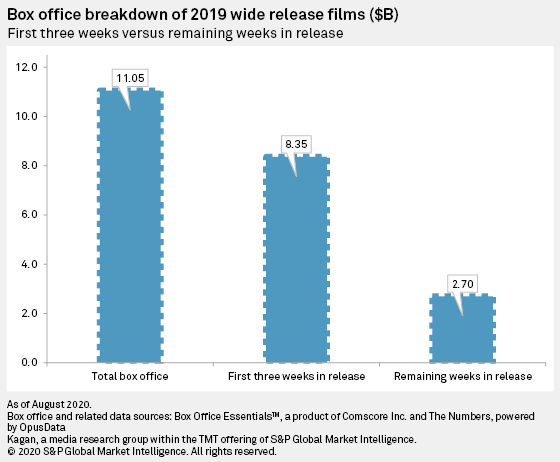 The $2.70 billion seems like a significant portion of box office that may be in danger when considering the deal between AMC and Universal, but there are a couple of things to consider. First, just because a film hits the PVOD window does not mean that it will be pulled from theaters. The film will likely remain in theaters past the three-week mark and still bring in some ticket sales.

Second, Universal will probably not release every film on PVOD, especially their franchise films like "F9" and "Jurassic World: Dominion." The PVOD option is more likely to be used for low-grossing films and films that are not building solid box office momentum in the first three weeks.

Meanwhile, the 30 films that grossed more than $100 million at the domestic box office grossed a total of $7.45 billion. They took in almost $5.56 billion of that in their first three weeks in theaters, which was 74.6% of their total box office. They grossed $1.89 billion during the rest of their theatrical runs and averaged 16.5 weeks in theaters.

This box office breakdown, we feel, shows that the portion of ticket sales at risk with the deal may not be as large as some may think — assuming that theaters eventually get back to normal in a post-COVID-19 world. It is also going to take more than just one theater chain and movie studio agreeing to a deal like the AMC/Universal deal to cause any kind of shift in ticket sales. Over the past 10 years, NBCUniversal's studios averaged a 14.3% box office market share and was only at the top of the studio market share ranking in one of those years — in 2015, when it captured 23.3% of the box office.

Average theatrical window down to 97 days in 2019 KAGAN