South Korea and Japan have the largest share of small cells, but there should be faster growth in mainland China, its special administrative region markets and Taiwan.

Although traditional towers still dominate, small cells and distributed antenna systems are gaining momentum in Asia-Pacific due to the aggressive push for 5G by China, Japan and South Korea.

Kagan estimates about 5.2 million towers and small cells in Asia-Pacific by year-end 2019. Majority of these are traditional macro-towers, while the remainder account for small cells and indoor/outdoor distributed antenna systems, or DAS, with most of these in South Korea. 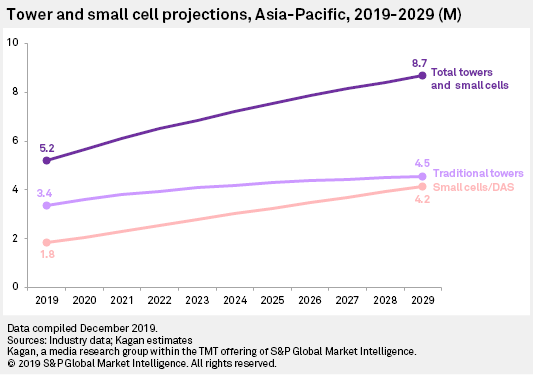 Asia-Pacific is a region of contrasts. There are the advanced markets of South Korea and Japan, which had network densification projects for 5G for the past few years. The highly urbanized Chinese special administrative regions of Hong Kong and Macau, as well as city-state Singapore, are comparable in their extensive use of small cells and DAS.

On the other side of the development curve are emerging markets such as India and Indonesia, which still rely on traditional macro-towers to cover large swaths of rural populations. Maldives and the Pacific island nations are the extreme examples of this group, eschewing towers altogether in favor of even less expensive satellite-based mobile networks.

While there is a great push for small cells in advanced markets in the 5G race, the reality is that the majority of the region is still unconnected to 4G networks. Traditional towers using low or mid-frequency spectrum are still the more economically feasible choice over more expensive small cells and DAS.

Mainland China, South Korea and Japan currently have the largest tower markets in Asia-Pacific. However, tower coverage in these markets already reaches the majority of the population, which means that future tower growth would rely on network densification in urban areas through small cells and DAS. 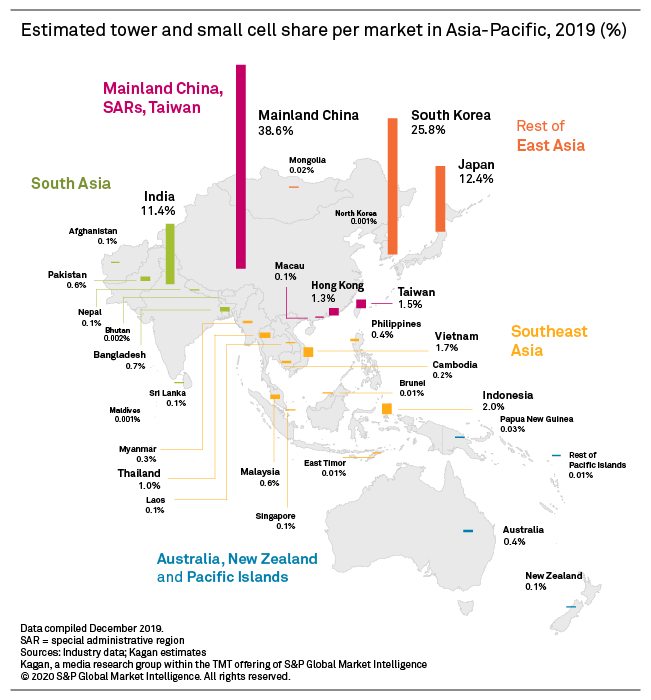 Traditional tower growth in Asia-Pacific in the next decade should piggyback on the ongoing network expansions of operators in key emerging markets. India still has a lot of room for tower-building in the countryside, where mobile penetration is still below the national average. Indonesia is another hotspot for tower growth in Asia-Pacific as local operators expand their 4G networks outside of the capital region of Java.

Bangladesh and the Philippines released tower licenses for the first time in 2018 and 2019, respectively, and this could hasten tower-building in these large mobile markets. Malaysia, home to pan-Asian towercos edotco Group Sdn. Bhd. and OCK Group Bhd., aims to consolidate its towers, but 4G and 5G could boost the demand for towers and small cells within the decade. Vietnam's fragmented tower market is also due for consolidation, but the recent introduction of 4G in 2017 could still give its towers a boost.

Only select towercos in Asia-Pacific disclose their portfolios of small cells and DAS, but we estimate the majority of the small cells in the region are in East Asia. South Korea and Japan should have the largest share of small cells, but there should be faster growth in mainland China, its special administrative region markets and Taiwan.

Small cell growth in South Asia and Southeast Asia should even be faster, but only because those regions currently have fewer small cells compared to East Asia. Small cells are less significant in Australia, New Zealand and Pacific island nations due to their geography.

Standard Broadband ARPU Anticipated In Hong Kong In Next 10 Years