The caveat to steady growth for the overall small cell market is the potential impact of the global COVID-19 pandemic. This impact was minimal in first quarter 2020, but is likely to rear its head and become quantifiably tangible from the second quarter of 2020. As such, the pandemic may dampen global small cell and 5G deployments over the next four quarters, or at least slow the pace of 5G implementations, to the point where Kagan may revise its next small cell forecast to account for this unexpected event.

5G deployments continue to generate attention and drama on the global wireless infrastructure stage due to the restrictions and outright bans on 5G technology from Huawei Technologies Co. Ltd., ZTE Corp. and other Chinese vendors. Citing national security concerns, multiple countries have implemented such measures; several weeks ago for example, the U.K. announced its decision to ban Huawei outright, from both its 5G wireless and wireline fiber network infrastructures.

Despite these strong headwinds, Huawei remained the global market share leader in the overall small cell market, including the fast-growing 5G sector, garnering 30.2% of total small cell unit shipments during the first quarter of 2020. Collectively, the worldwide small cell market is dominated by the top three vendors, Huawei, Ericsson and Nokia Corp., respectively, which together accounted for 77.4% of global unit shipments and 78.3% of the associated revenues during first quarter 2020.

It is also important to note that despite the hype and importance of 5G, and even its inevitability as the pervasively deployed wireless technology, at present the combined 5G technologies together represent only 21% of the total small cell market as of first quarter 2020. A snapshot of today's wireless deployments by technology shows that 3G/4G LTE solutions remain dominant, accounting for 74% of the quarter's total unit shipments. This comes down to the economics of network deployment imperatives; many countries are still building out their wireless infrastructure, and combined 3G/4G LTE radios provide larger geographic service coverage areas and are lower cost than comparable 5G buildouts.

Moving forward, however, 5G will undoubtedly overtake 3G/4G LTE as the dominant wireless technology. In fact, the crossover point is projected to happen by the end of 2022, according to our most recent small cell forecast: 5G drives near-term global small cell forecast to $2.2 billion. In fact the 3G/4G LTE decline has already started, despite a modest year-over-year “last gasp” bump of 3%. Comparable year-over-year growth rates of two key 5G technologies increased by 300% to 400%, highlighting the impending era of 5G. 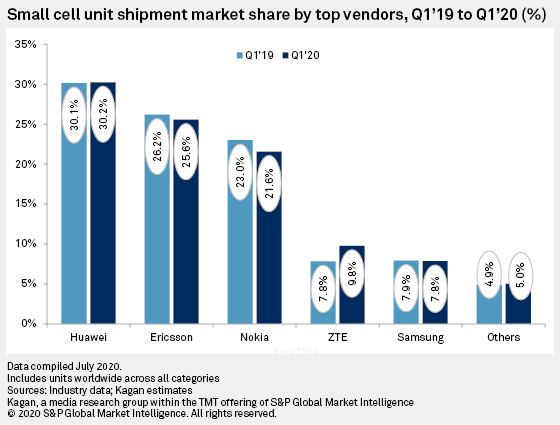