Root & Branch: A monthly review of the sustainable LEVFIN market

Looking at both prepaid and postpaid plans, price per GB for mobile Paksitani users were less than one dollar.

In June, the nation's industry watchdog published a regulatory framework that gives operators the authority and capability to conduct 5G tests. Operators can apply to trial theoretical 5G networks with spectrum under, but not limited to, 2.6 GHz, 3.6 GHz and other millimeter-wave bands

China Mobile Pakistan Ltd.-owned Zong has the largest pool of 4G LTE subscribers with 12.6 million subs out of its total 34.8 million at the end of second quarter 2019. In 2014 it was the first carrier to launch 4G services in Pakistan, utilizing the mid-1.7 GHz-1.8 GHz band.

Telenor Pakistan (Pvt.) Ltd. followed two years later, launching 4G in 2016 using the 800 MHz band. By the end of second quarter 2019, the Norwegian-owned company had 6.5 million 4G subs, or 20% of the national total, under its network. Telenor is the second-largest operator in the country, with 43.9 million subs at the end of the second quarter.

The third operator to launch 4G LTE was Jazz in 2017. The operator, which held the lion's share of total subscribers at 36% with 59.5 million subs in second quarter 2019, launched 4G with the same mid-1.7 GHz/1.8 GHz bands. Aggressive data promotions and bundles with OTT services such as WhatsApp and its in-house music app Jazz Free Music quickened 4G adoption, allowing the operator to snag 35% of the 4G market, or 11.0 million subs, by second quarter 2019.

Traditional 2G subs still composed more than half of the market at 58% of total mobile subs, or 94.3 million, down 4% year over year at the end of the quarter. 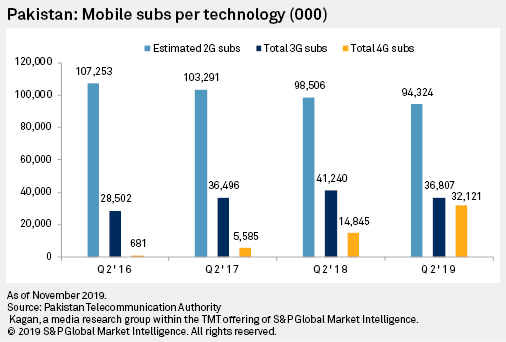 As of October, there were 109 publicly available prepaid plans. Ufone is capitalizing on its recent 4G LTE launch by doubling data and voice recharges through the SIM Lagao 6GM and Nayi Sim Double offers. In addition, half of its offers in the prepaid segment cater to consumers who recharge every seven days or less, with focus on data allowances on social media, OTT chat applications and streaming sites. Looking at both prepaid and postpaid plans, price per GB for Ufone is at 90 cents.

Although Jazz has low-tiered daily and weekly plans as well, the operator is trying to capture heavier data users through premium offers. Weekly and monthly pure data plans of 7 GB, 8 GB, 12 GB and 20 GB are available. The operator came out the least expensive at 40 cents per GB.

Zong and Telenor's prepaid plans are more of a mixed bag as the companies attempt to cast a wider net. Both are throwing unlimited on-net voice offers in the mix but are also offering pure data plans. 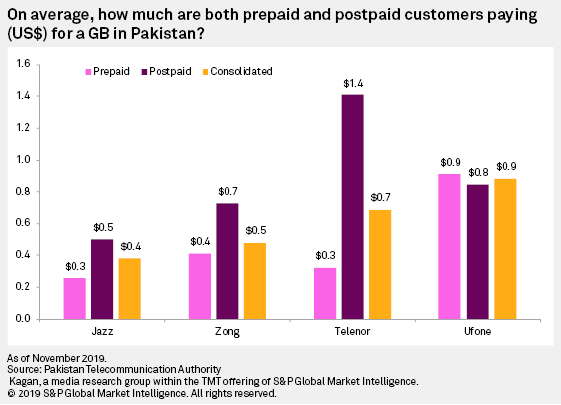 In June, the nation's industry watchdog published a regulatory framework that gives operators the authority and capability to conduct 5G tests. Operators can apply to trial theoretical 5G networks with spectrum under, but not limited to, 2.6 GHz, 3.6 GHz and other millimeter-wave bands. In August, Zong claimed 5G tests of 1 GBps in its local headquarters in Islamabad.

As the backdrop of initial steps toward 5G, it was expected that Jazz, Telenor and Zong would renew their 2G licenses under the 900 MHz and 1.8 GHz bands, which expired in May for Jazz and Telenor and in October for Zong. The government charged both Telenor and Jazz $450 million and Zong $470 million. All three challenged the government, claiming that in 2017 Ufone was able to renew its license for just $291 million. In a move to pacify the government, both Telenor Pakistan and Jazz have offered to pay a portion of the fees, $224.6 million and $291.0 million, respectively.

Jazz CEO Amir Ibrahim acknowledged the government's cash-strapped position and that the pressure to increase tax revenues is high, but drastic austerity measures could give pause to foreign investors seeking stability. The country is under pressure to improve policies and create structure in a large informal economy following a $6 billion bailout program from the International Monetary Fund approved in July.