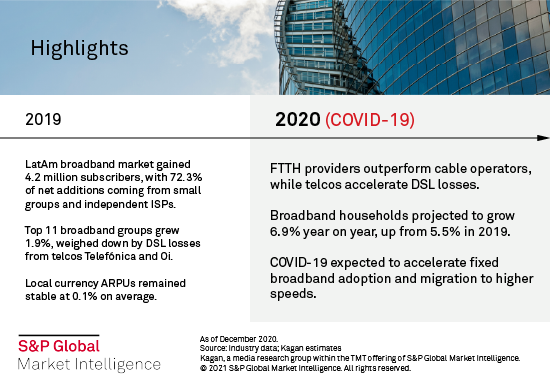 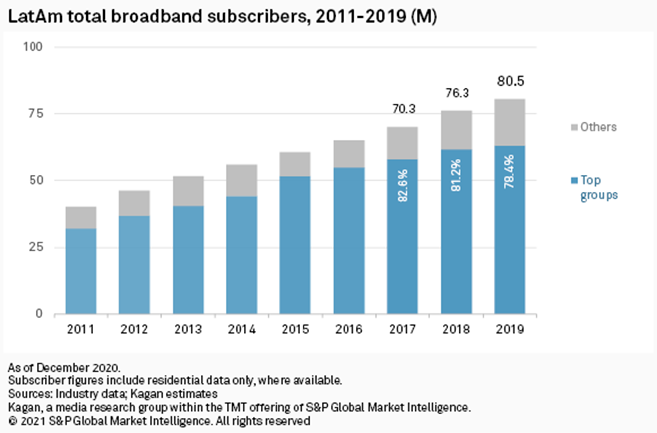 Fiber was the fastest growing platform at 48.5% year over year in 2019 while DSL dropped 14.2%, with the top 11 LatAm groups bearing the brunt of the over 4.0 million subscriber losses. Telefónica was the most affected group, followed by Brazil's Oi SA. Telefónica led fiber subscriber gains, however, as the company has shifted its focus from legacy technologies to fiber with the majority of fiber households in Brazil. This is the only operation the Spanish group plans to keep following its restructuring and spinoff of its remaining Latin American subsidiaries. The company lost 2.3 million DSL subs but gained 1.1 million fiber subs, while small ISPs saw a total of 3.2 million fiber net additions in 2019.

Still the dominant broadband platform in Latin America at 40.7% of broadband households, cable grew 6.3% in 2019 and remains the purview of the top operator groups, which control 92.4% of the market. This is largely due to their dominance of fixed service bundles, although the value of these has diminished significantly in recent years. Although cable multichannel adoption remains higher than cable broadband, largely due to small regional analog MSOs, this is expected to change by 2021. Among the top groups, cable broadband overtook cable TV in 2017 and saw its largest drop in 2019 as operators significantly boosted over-the-top partnerships to serve cord-cutting customers.

América Móvil and Telefónica remain Latin America's largest fixed broadband providers, dominating the segment with a 47.6% market share in 2019, down from 50.0% in 2018. While broadband was the only service where the top 11 groups saw subscriber growth in 2019, four of the groups registered declines — AT&T Inc., Telefónica, Oi and Telecom Argentina — due to losses in legacy technologies, although the latter three are expected to revert this trend with growth in fiber and cable. In 2019, Mexico's largest cable group, Grupo Televisa SAB, overtook telcos Oi and Telecom Argentina, becoming the third-largest broadband provider in Latin America.

Broadband revenues grew 2.9% in 2019 to $15.97 billion, with the service representing 41.4% of total fixed service revenues and 17.4% of total revenues for the top 11 LatAm groups. While ARPUs declined 1.2% in U.S. dollars, they remained stable in local currency at 0.1%. Although increasing competition from small ISPs has been driving down prices for fixed broadband in the region, this reduction has been compensated by speed upgrades. 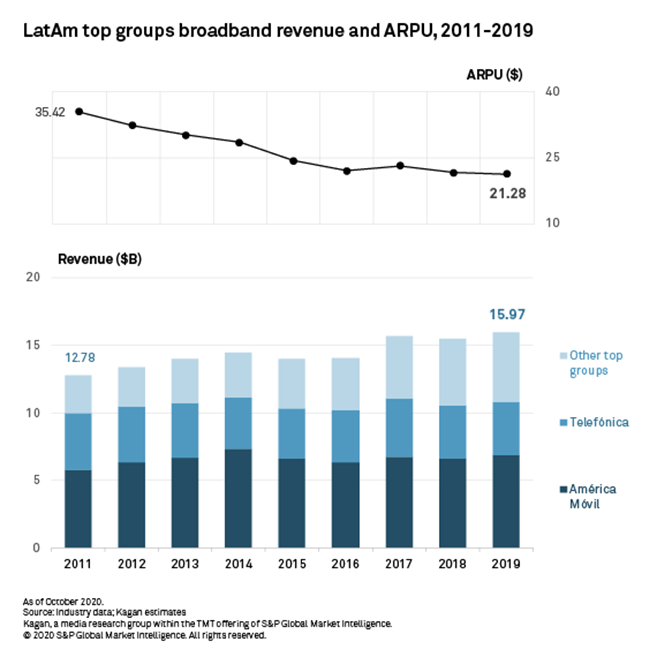 Kagan estimates residential fixed broadband services in Latin America accelerated growth in 2020 to 6.9% year over year, up from 5.5% in 2019, reaching an estimated 86.1 million subscribers, or 43.4% of total households. Although the COVID-19 pandemic and subsequent stay-at-home measures may have contributed to expanded broadband penetration in the region as well as accelerated speed upgrades among existing users, the trend was mostly due to consistent growth on the part of small fiber ISPs.

Based on reported data and estimates for third-quarter 2020, Kagan analysis shows that subscriber growth among the subsidiaries of the top 11 groups in the first nine months of the year averaged 13.4%, whereas broadband subscribers for smaller groups and independent ISPs grew 20.8%. Fiber operators continued to register the highest growth rates at an average of 34.1%, followed by cable at 23.5% while DSL continued to lose subscribers at an average 11.3% decline rate.